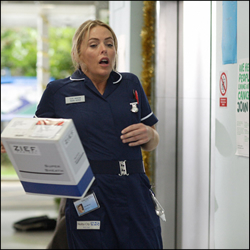 Elliot’s daughter, Martha, arrives at Holby to confront him about James. It emerges that James tried to commit suicide in custody and he blames Elliot. James could avoid prison if Elliot provides a character reference, but James would then have to live with Elliot.

Chrissie notices Sam’s hair, but still doesn’t know about his cancer. She shares her concerns with Stuart, who finally tells her about Sam’s condition.

Tim arrives from the STI clinic and distributes leaflets around the ward – but the staff either mock or generally ignore him. When Elliot takes his bad day out on Tim, he snaps and returns to Holby with a crossbow, shooting Zoe, Faye and Martha.