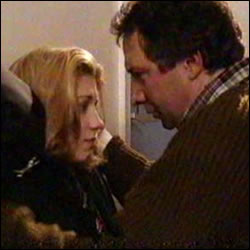 Neil turns up at a motorbike shop to see his friend Steve. They talk and it emerges that Neil has just been made redundant from his job and is about to move abroad to find work. Neil and Steve are still in the motorbike shop, looking around at the different bikes. Steve asks Neil if he’s racing and Neil tells him he’s moved on from all that, he doesn’t want to do it any more. Steve is annoyed and puts pressure on him, calling his a chicken and challenges him. Eventually Neil gives in and decides to race. Neil and Steve are racing down the motorway; each of them is doing increasingly adventurous stunts. Neil, when he tries to catch up with Steve, falls off and lies unconscious in the road.

Neil is brought in but he’s in a bad way. Steve refuses to accept that his friend might die and instead lashes out at the staff. Richard tries to talk to him but he runs into Resus. He sees George and Mark shocking Neil and realises the severity of the situation. He numbly walks back to Richard and admits that he reduced the rev on the bike to slow Neil down. Steve says he needed to win the race to stop Neil from going. After a while George breaks the news that Neil’s died. Richard comforts him and tells him it might not be his fault.

Edmund White and his wife June are decorating their house. They open the mail and begin to argue when Edmund says he didn’t get the job. Edmund and June are still arguing. She yells at him and then walks away from the fight, walking up the stairs to continue with the decorating. Edmund follows her, still yelling. As they stop at the top of the winding staircase June snaps at Edmund to shut up. He tells her to leave to decorating and talk to him. They begin to fight over the grouting brush and in the struggle June looses her balance and falls through the rotten banister and on the floor below.

Marian Copes is brought in with a broken ankle. She seems to be arguing with the Vicar who brought her in. The Vicar is talking to Eve about Marian. He says she broke into his church with a ladder, after he threw her off the bell ringers. She got caught in the bell ropes and dragged up. When he heard the noise he ran to the church and found her. When she let go she landed on her ankle. Eve can’t help smiling at the story. Eve notices that Marian is having trouble with her hands when she asks her to pass her something. Marian says she has arthritis, and this is why the Vicar asked her to leave the bell ringers. Eve tells her she should apologise to the Vicar. Later, Eve talks to the Vicar about Marian. He says they were teenage sweethearts. Then she jilted him 41 years ago, when they were 17. He still loves her and hasn’t forgiven her for it. Eve tells him to talk to her. As Marian leaves he offers her a lift home, and she accepts.

Baz goes into Charlie’s office and asks him round to hers for dinner that night. He tells her he thinks the night before was more about the alcohol than real feelings, and implies that he regrets it. Charlie tells her he can’t tonight, as he needs to think about ‘them’. Charlie goes back to speak to her later. He says what happened the night before could happen again and that he doesn’t want that. He says he will move out, he knows someone who can let him have a flat as soon as he wants it. Charlie tells her whatever she wants to do about Louis, alternate days, is fine by him. As he leaves Baz breaks down in tears.

Laura and Jade walk with Mark to the hospital. Laura tries to talk to him but Mark tells her that he’s moved on and they can’t be together anymore. As Laura and Jade walk away, George watches them . George is avoiding Mark at work. She tells him it’s obvious what’s going on with him and Laura. After Neil dies Mark tells George that he still loves her, and wants to be with her but that he can’t cut Jade and Laura out of his life. George says she’s sorry but she doesn’t want to have him part time. She wants all or nothing. After breaking the news of Neil’s death George breaks down and it is left to Richard to comfort her. She sobs, “why do I always trust the wrong man?” as Richard hugs her.

June is brought in with Edmund. She says she can’t feel anything and she’s hysterical. She keeps yelling at Edmund and shouts that she blames him for the accident. Charlie comes in and tells Tina to take Edmund to a cubicle and have a look at his hand. Tina looks at his hand. He tells Tina he’s unemployed and that June is mad at him for not being able to get another job. He says he’s terrible at interviews. Tina sympathises and tells him she was sure she hadn’t got the job at the hospital. They talk and Edmund tells her he and June don’t talk properly anymore and that she blames him for her fall. Tina says he didn’t push her, it wasn’t his fault. It was an accident. June tells Baz that she and Edmund don’t get on and that she doesn’t want him around her. Baz tells her she doesn’t have a choice, she’s going to need him. Eventually Tina takes Edmund to see June, they both apologise and realise they still love each other. They are still talking when Baz walks in and breaks the news that June is paralysed. Edmund can’t deal with it and walks out. He finds Tina and they talk. She tells him that June is going to need him now. He’s going to have to bathe, feed, and dress her. Tina tells him there will be help available but that it will be mostly up to him. Edmund says he can’t. Tina leaves.

Sunny asks Amy for advice on what he should wear for their double date tonight. Amy laughs at his choices before telling him that Tina is his blind date. Later she mentions that Keith has been put on nights so they can’t go, but that he and Tina still should. Sunny and Tina agree. Throughout the shift Sam, Amy and Tina are teasing Sunny about the women’s skirt that Sam found in his wardrobe, Sunny snaps back that Tina shouldn’t be laughing, she’s his blind date. She tells him she knows, that’s why she’s going. They continue to laugh throughout the shift and eventually Sunny sneaks off to get Tina some flowers before their date. He asks Sam to cover for him, and apologises for making Sam move out. Sunny says he needs the room for his sister.

Edmund keeps going up to her, asking her questions. In the end Eve snaps at her that they aren’t a counselling service and not to encourage him. Tina apologises. Later when she is leaving she runs into Edmund and he tries to talk to her again, she tells him she’s sorry but that he should speak to a councillor. He begins to get angry and lashes out at her. When Tina starts to get scared he panics and drags her into a darkened room in the deserted corridor and rapes her.

Sunny is in the bar waiting for Tina. He looks at his watch and walks away passing the flowers to a women on his way out. He walks home and stops by the hospital, glancing at it.

* Marian Copes – Broke ankle after breaking into a church to get revenge on the Reverend who sacked her from the Bellringers.

* Neil Simms – Severe primary head injury after falling off his motorbike during a race. Dies in Resus

* June White – Falls to the ground floor during an argument. Paralysed.

[Motorbike shop. Neil pulls out in a car]

Neil : I dunno. Still messing about with this rubbish are you?

Steve : Story of my life.

Neil : Always got oil on your hands.

Steve : I like oil on my hands! Bit late aren’t you?

[Sunny is in the bar, waiting for Tina]

Sunny : There you go. Specially for you.

[Sunny walks past the hospital and glances back at it]

“My fingers are inside his head. This is NO GOOD” – Baz

* The registration of Neil’s red car is R539 MCF

In this article:Cas Series 12, Gil Brailey 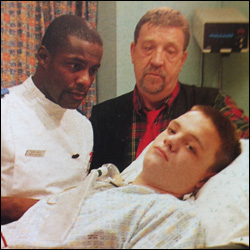 S12 E14 (6 Dec 97) : Out of Control by Carolyn Sally Jones Episode Summary Mark is rightly concerned that Archie, the locum consultant, is... 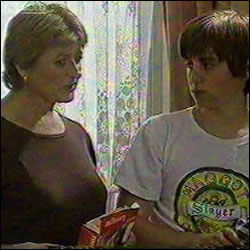 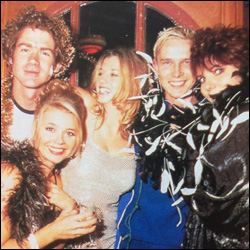 S12 E16 (20 Dec 97) : Facing Up by Jonathan Rich Episode Summary It is the day before Christmas and the staff are putting up... 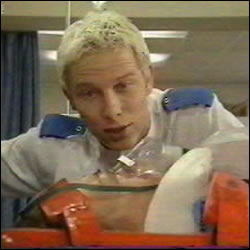 S12 E5 (4 Oct 97) : The Things We Do For Love by Peter Bowker Episode Summary Money is available for the department, but it...