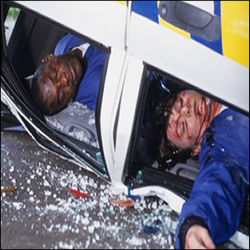 In A&E George dashes across the department whilst Charlie is on phone. Outside the hospital Cassie’s dad, Gary Williams, is rushed into A&E whilst Eve assesses passengers in the paramedic car where Julie and Mark are still trapped. Eve assists Julie whilst the paramedics attempt to release Mark who is unconscious. As Julie is carried into A&E Mark regains consciousness but is obviously confused. Eve attempts to hold him in conversation to prevent him falling back into unconsciousness. Julie makes her own diagnosis as she arrives in resus.

Bonnie Russell is doubled up in pain on toilet floor as Chloe rushes in. A woman arrives and together they manage to lift her into the wheelchair. As her husband is still hanging around in reception Chloe arranges for her to be taken straight to a surgery as arranged by George but is later reprimanded by Charlie for acting without consulting him first. When he locates Mr. Russell in the waiting area and tells him that his wife is in surgery receiving treatment for internal bleeding Mr. Russell accuses him of deliberately keeping him in the dark. Charlie tells him his wife did not wish to see him and was found hiding in the toilets. Mr. Russell leaves to go in search of his wife. Chloe goes after him and accuses him of beating her. He insists that he would never hurt her and explains that she borrows money from ‘the wrong people’ in order to feed her love of ‘nice’ things.

Joe and Keeley run into school gym and collapse on floor whilst Josh attends to Anthea. There is an explosion at the school where the head tells the fire crew that they have one teacher and five children missing. Joe and Keeley climb the wallbars to reach the top windows where Keeley escapes out onto the roof. Looking back Joe spots Mrs Hinton and the remaining children crouching on the floor and turns back to help them. He finds a fire extinguisher and begins to tackle the fire, creating a path for the others to escape. He shows them the way out through the top window and holds it open while they get out. The last child he helps through is Murray who appears to pull Joe through the window by the shoulder, but as he does so Joe falls backwards into the gym. Sitting in the ambulance later Murray tells Penny that his friend Joe is still trapped. The fire crew spot Keeley on the roof and rescue her. George arrives to help Mrs. Brimlow. She tells Josh about the car crash involving the medical team. After taking Mrs. Brimlow to the ambulance Josh insists on going back into the building to find the missing teacher and children. As the fire crew tackle the flames Josh locates Joe lying on the gym floor. Outside the school the fire officer asks the headmaster what was stored in the building. Murray’s father and Joe’s mother arrive together in a car, then follow their children to the hospital, where they meet up with Joe’s father.

The van driver is brought into an already crowded resus. Eventually his girlfriend arrives to find Cassie helping Amy in reception and Tina takes them to see Gary.

Nick Worthington is brought into reception and Tina takes him to resus where they are busy dealing with the first patients from the fire. Sean starts to treat him and calls Max over to intubate. Tina asks Leila how much Nick has drunk and tells her he is fighting for his life. Charlie discovers needle bruising on his arm as Max attempts to resuscitate him. Tina tells them he has been injecting alcohol. Max and Charlie fail in their attempts to save him. Max remarks on the stupidity of his behaviour.

In his office Charlie questions Leila about what happened to Nick. She says she read about injecting alcohol in a medical journal. Her father is Phil Hegarty, a gynaecologist at the hospital. She begins to cry as Charlie speaks to Nick’s father on the phone. Mr. Hegarty arrives to find his daughter in Charlie’s office and she admits responsibility for what happened to Nick but when he tries to convince her that it was not totally her fault she refuses to accept this and he gives in. When Sam arrives in the relatives room to inform Nick’s parents of his death he finds Mr. Hegarty and Leila already involved in a heated conversation with them. Mr. Hegarty tries to convince them that all three were to blame and it was ‘just kids experimenting’. Mrs. Worthington asks to see her son. When the police arrive Leila admits to her father that she injected the alcohol into his blood, not Nick but he tells Charlie later that she was confused and got it wrong.

George and Josh arrive in resus with Joe who has arrested in the ambulance on the way. As Max begins to treat him George asks where Mark is and Max replies that they have not yet released him from the vehicle. Outside they are just lifting him onto a spinal board before moving into resus as George rushes out to find him. Max starts to treat him as he arrives in resus.

As Mrs. Brimlow is being transferred from resus to a ward for further treatment the headmaster arrives and she questions him about the cause of the fire. She realises that he knew very little about what was going on in his own school. Later the caretaker asks the head if he has any idea how the fire started. He replies that the fire service are investigating.

Charlie tells Mr. Hancock that Joe is critical just as his ex-wife arrives and asks why she wasn’t told about his condition before. Charlie takes Mr. Hancock to see Joe in resus and while h is there Joe goes into EMD. Max and Charlie struggle to save Joe as his father looks on. Eventually Max calls for him to be transferred to paediatric ITU saying he has had ‘enough dead kids for one day’.

Penny and Josh are seen commenting on the apparent chaos they found at the school when Charlie joins them adding that they have lost three patient in the department that day. As Max arrives Charlie asks about Joe and Max says his condition is not good and that he needs ‘a second’ before speaking to his father. Max wonders why ‘we bother’ with kids as Penny and Josh are called away after enquiring about Mark’s condition. Max returns to resus where he tells Mr. Hancock that Joe’s chances are slim.Mark’s sister arrives in reception as Max decides to send him for a scan suspecting a temporal fracture of the skull. George takes her through to see him. Mark is obviously confused as George and Sunny take him up in the lift for his scan. He loses consciousness and as George is unsure whether to continue Sunny argues that they should take him back to resus. On arrival George suspects an inter-cranial bleed and tells Tina to crash call the anaesthetist and call Max from his office. As there is no anaesthetist available Max inserts a tube and sends him onto CT. George thanks Sunny for his help. As they leave Max throws a jelly bean at Tina’s back and accuses Sean when she complains. He suggests to Charlie that the whole department should go for a drink after the hard day they have had. Charlie then speaks to Sean about his lack of support for Chloe earlier. Later Sean tells Chloe she got him into trouble. Meanwhile Hannah Martin is wheeled into resus with a severe PB haemorrhage as the result of a DIY abortion.

Joe’s mum finds Murray and his father leaving the department and as she tells them about Joe’s condition Murray starts to cry. Keeley accuses him of hurting Joe and Joe’s mum questions him further. He admits to frightening Joe in the classroom. As they wait Charlie takes her to his office and explains the seriousness of Joe’s condition. She follows Joe and his father upto ITU where Mr. Hancock accuses her of messing Joe about by moving in with Murray’s dad.

Leaving resus Max thanks Adam for his hard work and Charlie says they all did well before inviting the team to the pub telling them Max is buying. In the staff room Tina tells Sam that although she is grateful for everything he had done she feels it is time for her to move on and get a place of her own. As they all leave for the pub George joins them and when Charlie asks about Mark she tells him that there is no bleed, but bruising and that he has his family with him. As Charlie and George leave he reminds her that she had a date for the evening but she decides to let him wait.

* Nick Worthington: dead as a result of injecting alcohol into his bloodstream.

Charlie, George and Sam leave for the pub.