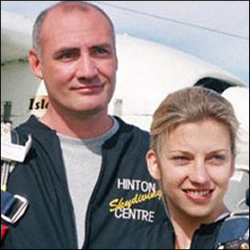 It is Patrick Spiller’s first day at A&E. He is seen speeding through the streets of Holby on his way to work. He swerves to avoid another car, and causes a man, Terence Warburn, to fall off his bike. Patrick doesn’t see the accident until he has driven on, but doesn’t stop. Sean sees the man fall off his bike and rushes over to help.

At work, Patrick overhears Sean asking Charlie about his car. Sean finds out that Patrick was the one to cause the accident earlier and takes an instant dislike to him. Duffy, Tina and Adam also are on the receiving end of Patrick’s bluntness and rude manner, but Chloe says that she thinks he’s cute.

Sean treats Terence Warburn, who has a fractured ankle. Sean tells him about the parachute jump, and he tells Sean that he will sponsor him – and gives him £30. Sean later talks to Patrick about the accident but he denies any involvement. His condition later seriously deteriorates and he is taken into crash. The team struggle to resuscitate him but Patrick says they must carry on.

Duffy talks to Charlie and thanks him for being right about her relationship with Max. Duffy then speaks to Max about how awkward it is to work with him. He apologises and also agrees to say sorry to Charlie for what he said the previous day. When the two talk, Max brings up Baz and the fact that she was also married when she and Charlie began seeing each other. Charlie says the two situations are very different and whatever happens, Duffy won’t leave Andrew. Max tells Charlie that he should be honest with himself and accept that he has feelings for Duffy.

A man, Albert Sylvester, is brought in and Patrick treats him. He diagnoses an aortic aneurysm. In recus, Holly arrives to help and Patrick, hearing her voice, says he doesn’t want another nurse, he wants a doctor. He then looks up and sees Holly, and it is obvious he recognises her. Holly, however, introduces herself as if she has only just met him. The other members of staff notice straight away that there is something going on. Later, Holly later asks Patrick why he couldn’t just pretend they were strangers.

Mr Sylvester tells Patrick that although he has been advised to have surgery, he didn’t want it. Patrick explains that his condition has worsened and he needs an operation or he will die. Mr Sylvester does not give consent to operate, and says that he wants to write a letter before he agrees to anything. He dictates the letter – to his son James – to Holly. His daughter, Tanya, arrives, but Mr Sylvester says that she’s no daughter of his. He says he wants James, but Tanya says he can’t be there.

Mr Sylvester’s condition deteriorates and he is taken to theatre. Tanya is told that she should be prepared for the worst. Duffy asks Tanya what she should do with the letter to James. Tanya asks for it, but Duffy says it’s not addressed to her. Tanya says it is – she is James. She’s a transsexual and her father couldn’t accept it. He later dies.

Chrissie Hollman is presenting her daily radio show, that relates to personal problems. A man, ‘Derek’, calls and talks about his wife, saying that he feels isolated from her. He says that he will kill himself if things don’t get better. During the call, Chrissie collapses from stomach pains and Derek is cut off. Josh and Penny had been listening to the radio show in the ambulance and Josh had been saying how boring it was. Arriving at the radio station, Josh tells Chrissie he is a big fan of her show and never misses it. At the hospital, Chrissie’s husband, Tony, arrives. Chrissie realises that it was him who rang up her radio show. They talk and decide to work hard at their relationship.

Max, Tina, Sean, Penny and the others get ready to go to the parachute jump. Barney drops some toy parachutes off the balcony above reception as a joke but it upsets Adam, as it is the same balcony that Sam fell from and brings back bad memories. Barney apologises and Adam says he over reacted. They all set off to do the jump.

Holly and Patrick talk in the staff room, and Patrick apologises for dropping Holly in it earlier. He tells Holly he is staying in a penthouse. Patrick asks what Holly is doing after work, and she says she is painting peads recus. Patrick says it’s a shame, as it would have been nice to catch up. Patrick later asks Holly if she is seeing anyone. She says that she is – that he is short, blonde, polite and considerate. Patrick says that he sounds just like him.

When arriving at the parachuting grounds, a local paper is there to take a photo. Sean and Tina are persuaded to kiss for the photo and Max watches, looking unhappy. Sean asks Tina if they are friends again. Tina later shuts the door of the van and accidentally traps Sean’s fingers in it. His fingers have to be bandaged and Sean cannot jump first with Tina, as planned. Max is picked instead. In the plane, Max is nervous about the jump so Tina promises him a kiss when they land. They both jump, and Tina lands under her parachute. Max runs to help, and goes under the parachute too. They give each other a quick kiss, then, looking at each other, they kiss again.

[At reception, Amy, Barney and Adam]

Barney: …You two wusses don’t know what you’re missing out on.

Adam: Anything that has the words dangerous and sport attached is to be avoided at all costs, in my book.

Adam: This job is enough of an adventure enough for me.

Barney: Aye, but think about the buzz!

Amy: We can get the buzz hearing about it for weeks to come thank you very much.

[After the parachute landings]

Max: Couldn’t put it better myself!

Tina: How do you top that?

[They kiss, and then kiss again.]