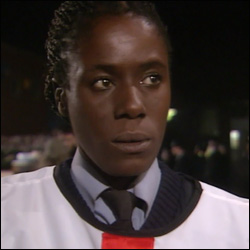 Shirley Franklin, one of the new ambulance team (with Keith Cotterill), has trouble getting to work when the police block off her street. Her son, Marcus, is missing and she’s worried.

Megan’s husband, Ted, crashes his taxi into a skip, as a man involved in the drug ring tries to overtake him in his car. The police are aggressively questioning locals in the black community, about drugs. Charlie and Mary are at the scene on standby, as a fight erupts, many casualties are brought in, as youths throw petrol bombs – one hits a police van, which careers into an old lady, Amy and a man, Vance. Amy dies, her sons charge through the department, looking for the police driver (who has a broken leg) and blames him.

Duffy is again working as Acting Sister, she snaps at Susie and Megan. She apologises to Megan later, who wanted a homeless girl, Jules, admitted, and admits she’s worried of failing.

Elizabeth cooks Ewart dinner at her home, and they spend the night together, the staff try to bleep him, but he ignores it, till he eventually turns up at 4am, confused and tired – Mary tells him to go home.

Shirley returns home and sees the estate in destruction. She finds her son, now safe, with her neighbour, Linda, after he was arrested, strip searched and put in a cell, even though he’d done nothing wrong.

Many casualties from fight, including;

* Cyril treats a man with a sprained ankle and is sick, he is not happy being treated by a Student Nurse.

* Jules – homeless girl, drunk and suicidal at the thought of leaving hospital.

Blue removal van – with undercover policeman inside parks up in Shirley’s street;

Shirley : Off! (to daughter about TV)

Michelle : Can’t I just watch the end of this?

Michelle : Why do you always have to give me such a hard time about homework?

Marcus : I was just looking for Paul, the beasts, they’re beasts, I hate them.

* Shirley has a daughter, Michelle and a son, Marcus. They live on Bedford Street.

* Holby City (football) had played at home at the weekend and won 2-1.

* ‘Oscar’ the porter extra in later series’, plays an extra in the black community.

* Elizabeth has an older daughter, Louise, and lives in a house with the Suspension Bridge as her window view.

* Shirley was born in England.