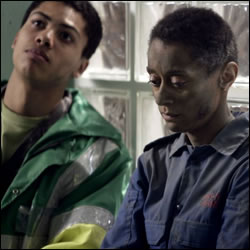 Maggie’s son Jamie is shocked to discover that his father is alive and has been in prison for years – and that Maggie lied to him. Steve talks to Maggie and tries to convince her that he has changed but she is not interested. Steve tells Maggie that Joanne started contact with him after Maggie’s Dad Stan let it slip that he was still alive. He says it’s now up to the children not her, if he’s in their lives. Maggie confronts Bruno, demanding to know why he interfered and called the prison. But when Joanne awakes and asks Steve to stay, Jamie sees what he thinks is a family reunion and storms off. He tells Maggie he is leaving home.

Tess and an unconcsious Lance are trapped in the mine shift, along with asylum seeker Mero, and other casualties including a woman with a leg injury and Mero’s friend who has serious head injuries. Mero tries to keep their sprits up and forms a close bond with Tess. Mero finds the baby that Tess heard crying alive. Lance has a serious pelvic injury but Mero’s friend dies. The rescue workers manage to find a way down and pull Tess and the others out to safety, but Mero, who is last out, falls down the shaft. Tess is hysterial and clings to [ID 1347]Sam[/ID]. At the hospital, she is in shock and cannot believe Mero is dead. She has an emotional talk with his father, Imad. However, Mero is later brought in alive and the pair are reunited.

Kelsey flirts in French with asylum seeker Makemba, however Guppy puts her French to shame. He has two broken ankles and Guppy discovers he has been lying about his age.

Many injured from the protest/ building collapse including;

* Joanne Coldwell – recovering in ITU with a head injury.

* Mero Hashid – falls down mine shaft.

* Imad Hashid – broken bones in back.

* Steve went to prison after a bungled armed robbery in which he shot and killed a woman in the face. He got an 18 year sentence.

* Impressed with her own French skills, Kelsey says to Guppy ‘You’re just jealous because you’re a nerdy bookworm!’. Later she discovers his French is much better than hers!

* Maggie storms at Bruno ‘You’re a malicious, vindictive, nasty piece of work..!’ – Harry has to break them apart.

* When Josh manages to eventually get to Tess and the others in the mine shaft he says jokingly ‘Someone call for an ambulance?’

* Jamie is angry at recent events and says he’s leaving home. Maggie questions what she should tell Joanne. ‘Tell her I’m dead’.