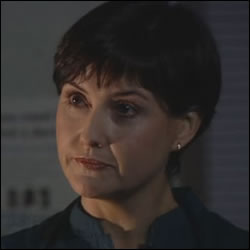 Kelsey agonises over whether to tell Selena the truth about Nathan as their wedding approaches.

Harry’s had enough when news of Alice’s harrassment claim is leaked to the papers. Still feeling regret over making the claims, Alice looks into Harry’s confidential file to see if Nathan’s story that others had complained against him are true but is upset to find out he was lying. Selena happens to find out what she is doing and is shocked when she learns of Nathan’s deceit. Selena confronts Nathan who says he did it because of the new job he was offered and promises there will be no more lies between them. But Kelsey decides to confront Selena with the truth. Distraught Selena tells Nathan it’s all over.

Meanwhile as Harry confronts awaiting press, Alice comes forward to say she is withdrawing her complaint against him. She later tells Sam she plans to resign.

Dixie tries to take control on her first shift as Duty Officer and urges staff to make all emergency calls within 8 minutes. When she and Cyd take a call to a graveyard where a man, Lance, has been pushed into an empty grave spot. He suffers cracked ribs. The paramedics are left in a corridor with the patient, awaiting to check him in. Dixie makes an enemy of Tess when she says she will leave him on the floor unless he is seen.

An elderly man, Roy, has burnt himself whilst using a chip pan. He is coy about being found dressed in woman’s clothing but Abs uncovers his tragic motive when he learns Roy has recently become widowed.

Following an argument with her foster parents, Molly is brought in with a wrist injury. Staff learn she was taken from her natural parents when they were accused of abusing her however they have always claimed Molly suffered from brittle bones. Selena sees evidence strongly supporting this however her parents still face a long struggle if they are to ever get their daughter back. When the parents leave and Molly goes missing – they realise they have all gone on the run together. Although upset the foster father sympathises with what they have done.

* Selena rages at Nathan ‘I don’t want a life with you!’

In this article:Cas Series 21, Jason Sutton