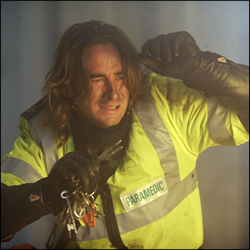 Big Mac, the new hospital porter – grumpy, overweight and a hypochondriac to boot – arrives at Holby ED. On his arrival, he spots Charlie, who is carrying a guitar – a present for his son, Louis – and can’t believe that he is a nurse.

As Big Mac walks in, Ruth, Jeff and Dixie rush into the ED with a seriously ill patient. The team all battle to save the young man, who has been attacked, and succeed in getting him stable and prepared for theatre. Someone purporting to be his brother arrives, however, and the situation deteriorates.

Charlie later has to cancel plans with his son for a meeting with Harry. A disappointed Louis joins in with a gang at school, instead, but they soon come across a storeroom and start smoking. The headmaster, Mr Bowen, walks past and smells smoke. He tries to get into the storeroom but it has been barricaded shut from the inside. The gang, meanwhile, don’t realise that a fire has started. An emergency crew soon arrive and try to rescue the pupils, but Louis is missing.

The blog, meanwhile, continues and Toby enlists Big Mac’s help in clearing his name – fed up at the accusations from both Harry and Adam. They get the team together and are about to announce the culprit, but, before they say anything, the blogger panics and reveals his identity – not aware that he has been trapped into doing so.