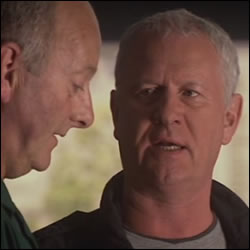 Charlie is less than thrilled to still be in the ED when he should be off on his course and even daydreaming of pints of beer isn’t enough to shake off his grumpy mood. Having failed to persuade Nathan to take an interest in the department’s struggles he tries to leave, only to be called back in by Tess to give new F2 doctors Toby and Ruth a tour of the department.

The team surprise Charlie with a cake to celebrate his 35 years in nursing. Charlie mumbles his thanks before leaving, only to be pursued by Josh who tells him to apologise to his friends. Charlie reluctantly returns to find Maggie supervising Toby who is spectacularly failing to carry out simple procedures. Finally having driven away Charlie receives a call from Tess – a major incident has been declared and she needs his help.

Charlie heads straight to the site where he finds himself called on by Dixie and Greg to calm down a small child in the rubble and by Nell to save a dying dog. Finally at the Casualty Clearing Station Charlie starts clearing out the walking wounded. Old ex-soldier Denny is reluctant to leave and when young injured squaddie Russ kicks off about his missing comrade Scotty, Charlie is glad of Denny’s help in calming him down. Toby begs Charlie to help him find a little girl, Rayne who has gone missing and Charlie reluctantly gives Toby the keys to his precious car before hopping in an ambulance to go back to the ED.

It is chaos back at the ED with not enough staff, no temporary mortuary and an absent Nathan. Charlie finds Louis’ old primary school teacher Mrs Stubbs hiding away suffering severe back pain. He gets her some painkiller (asking Guppy to write up the prescription later) and tells her to take it easy. Fareeda loses output and is rushed into Resus as Russ kicks off again having spotted Scotty’s dead body in the corridor. Luckily the cavalry arrives in the form of Holby City’s Connie Beauchamp who instantly takes charge. She calls time of death on Fareeda (whose father Saeed is quietly shocked) before turning attention to a very sick Christine. Connie is about to give up but Maggie is determined not to let her die – the pair bond when they manage to save her.

Charlie is horrified to find Toby with Mrs Stubbs who has collapsed from anaphalatic shock. Connie manages to stabilise her but bawls at Charlie for giving painkillers without a prescription. Alone in the lift Charlie completely loses it, banging the lift walls in frustration.

Nell meanwhile is deteriorating fast, becoming increasingly numb. The team see a small chest wound and detect a slight heart murmur and Connie’s x-rays reveal a tiny fragment of metal has entered her arteries and is causing a stroke. Left untreated it will kill her but Nell refuses treatment. She tells the team that she is an animal rights campaigner. She admits to being involved in the bombing but won’t say if there are any more bombs.

When an unattended bag is spotted, the department is evacuated and only Charlie remains to sit with Nell who has now stroked out and wait for the ICU team to collect her. Charlie has a quick check around the department for the missing Toby but when he returns to Resus he finds Denny cradling Nell in his arms and Saeed watching on in horror. Saeed goes for Denny with a scalpel but Charlie manages to persuade Saeed that this wouldn’t be justice. Saeed leaves and Charlie realises he must persuade Denny to give himself up. He takes him to the staff room to see the many dead bodies and they’re surprised to find Toby there, asleep under a pile of coats. Together they persuade Denny to give himself up. The unattended bag turns out to be a false alarm when it turns out to be Toby’s.

* Margaret Stubbs – back pain, suffers anaphalatic shock after being given paracetemol.

* Christine Girven – serious injuries from being crushed in debris.

* Charlie’s not impressed with Toby at first, ‘He’s painting the walls with patient’s blood!’

* Charlie is shown smoking, after giving up 20 years ago.

* Feeling disillusioned, Charlie says ’35 years in this job and I don’t know how I feel anymore.. no-one cares how long I’ve been in this job – least of all me’.

* Seeing Charlie, Maggie asks him ‘Where’s Charlie? What have you done to him?’

* When Toby wakes in the staff room he asks ‘Why are there dead people in here?’

* Charlie tells Ruth off for her rude attitude, ‘You can learn the names of all these nurses and manners!’