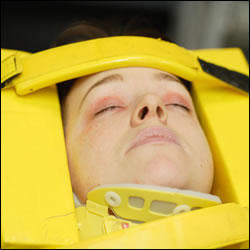 Abs tells his colleagues they are calling off the work-to-rule, while Tess reassures the department how vital they all are.

David, the father of an autistic child, Joe, is unwell, disorientated and can’t see. As he stumbles away from the soft play area where his son is playing, his condition worsens and he ends up being taken to Holby ED. His son, Joe, meanwhile, causes an accident in the play area and, along with a young girl, Lily, is also taken to Holby ED.

Adam struggles to deal with Joe and argues with Jessica over his treatment. There is still a spark between Jessica and Adam, but Jessica tells him she is not looking for a relationship.

Elsewhere, Ruth tries to impress Marilyn but, unbeknown to her colleagues, she is also taking caffeine pills. She deals well with Lily, performing a complicated procedure expertly, but a misdiagnosis in the condition of David has repercussions no one could foresee. Having made an initial assumption that he’s drunk, Ruth ignores Kelsey’s opinion and decides on a particular course of treatment. She is later shown some medical notes, which illustrate her mistake, and the team question why she didn’t ask their advice. David dies and Ruth is left devestated by her fatal mistake. She tells the team it won’t happen again.

That night, Ruth writes up her diary, unable to face the situation she has created, and decides on a drastic course of action. Toby and Abs decide it’s time Ruth lets her hair down and go round to see her but are shocked to discover her hanging in her room.

A man, Linden, needs a drain for a tumour caused from asbestos. He wants only Tess to treat him because she had previously saved his wife.

* The music played at the end of the episode was ‘Spiegel Im Spiegel’ by Arvo Part.

* Called to a shout at a soft play area, Dixie tells Jeff ‘If you ever fancied a change of career – children’s entertainer is right up your boulevard!’

* Seeing Adam and Jessica argue, Zoe goes off to smoke, ‘Nasty habit I know, but it’s how I let off steam. Neither of you smoke? Hmm, you should try sex!’

* At the end of shift, Ruth calls everyone together, ‘What happened today, I’m really sorry. I’d like to apologise for my mistake – it won’t happen again’.

* Tess is feeling the pressure, she tells Harry ‘I need another senior nurse – I need Charlie! We’re sitting on a time bomb’

In this article:Cas Series 22, Dana Fainaru