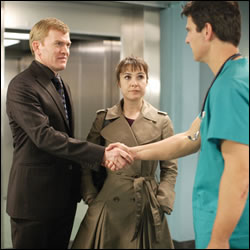 Toby spends the night with Joanne, but is late for his night shift as he lingers to say goodbye to her.

Zoe and Adam are still reeling from the revelation that Sean and Jessica are married. Zoe is livid that Sean didn’t tell her, and Adam feels he can’t trust women any more. Jessica tries to approach him, but he walks away.

Charlie, meanwhile, takes Louis to a gig, but they stop to help a girl whose car has broken down. Louis is thrilled when it turns out to be Annie War, the cool lead singer of the band he’s en route to see, but he’s embarrassed by his “uncool” dad.

Elsewhere, Ellie leaves Stacey at home with their son, Joey, whilst she goes off to work her night shift. Stacey can’t find his stash of alcohol, and takes Joey out on “an adventure” to get some. However, they end up in the ED. Having put his son at serious risk, and injured an innocent passer-by, Stacey must now face up to his alcoholism.

A woman later comes into the ED with abdominal pain, but denies being pregnant.

Abs has tried his best to get Ruth to emotionally connect with her patients. When they treat an old lady, Mrs MacFarlane, Ruth is her typical brittle, cold self. Later on in the shift, however, Ruth manages a simple act of compassion towards her when she brings her a magazine.

As the shift ends, Adam feels that he might have acted hastily, blaming Jessica and shutting her out. He approaches her to talk but, as he starts to speak, Sean appears.

In this article:Cas Series 22, Mark Catley