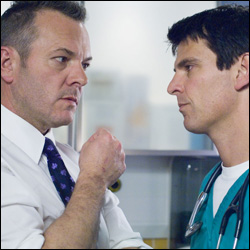 Jessica’s plans for a home birth are shattered when her labour begins much sooner than expected. Her friend, H, steals an unmarked police car to take her to the hospital.Elsewhere, Dean doesn’t like his mum, April’s, new boyfriend, Dennis. In order to foil the family’s plans to make a new start in Greece, Dean plans to burn down their restaurant. When the three of them are caught in an explosion, however, April realises her time is short and calls her sister, May. April’s dying wish is that May becomes her son’s guardian.

Jordan, meanwhile, plays a dangerous game with Adam. Cunning in his approach to de-stabilise Adam and, just before Adam’s visit to Henry, he reveals the news that Jessica has had a baby.