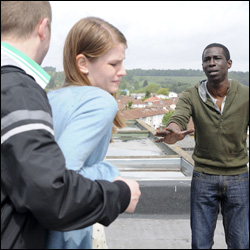 After the devastating coach crash last week, the Emergency Department (ED) team are brought together to deal with an influx of casualties, in the final episode of a two-part story for the medical drama – which concludes this current series. Even Jordan puts aside his own troubles to help treat the victims – much to Henry’s disapproval.

Distraught after telling the police of Curtis’s whereabouts, Alice has a change of heart and refuses to tell DI Moreland where Curtis is going. Instead, she uses Jeff to help contact him. They meet, and Alice admits Curtis was right – they do need to run. Horrified at seeing the change in Alice, and not wanting this to be the way she has to live her life, Curtis makes a big decision and hands himself in to the police.

On what was meant to be the happiest day of her life, a distraught Alice returns to the ED, alone, to find Cathy Malone being treated in resus and her son, Ryan, suffering a critical stab wound. Big Mac helps her put two and two together, and Alice makes a heartfelt plea to Cathy to tell her what happened.

Cathy’s loyalty is pushed to the limit and her surviving son, Callum, brings his crew into the ED – only to find out that his mother has turned him in. He reacts violently and a riot ensues. He grabs Alice and takes her hostage. Will Curtis be able to save her?

Meanwhile, Jordan foregoes any goodbye drinks and fond farewells and makes a discreet exit from the hospital – leaving the department he has worked so hard for behind him. He heads off to start the next chapter of his life – not sure how long he has left, or what the future holds.Adam is Jordan’s natural successor, and this is what Jordan has always wanted – to leave the ED in Adam’s hands – but will the hospital hierarchy decide he has what it takes?