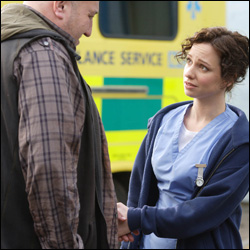 There’s new blood in the Emergency Department as Lucy Gaskell joins the cast of the medical drama as staff nurse Kirsty Clements. Ruffling feathers, she makes an instant impression – and not necessarily a good one.

It’s Kirsty’s first day in the ED, but her forceful attitude could be her undoing. Spying Ruth with a patient, Kirsty publicly informs her that he’s an addict, after morphine. Ruth is less than impressed to be shown up by the new girl. Jay starts the rumour mill, telling everyone Kirsty left her last job under a cloud. She certainly doesn’t impress Tess by later fighting with a patient. It looks as though her stay at the ED could very short…

Jeff and Dixie find Stewart distraught and covered in blood. Investigating a noise in Stewart’s basement, Jeff discovers teenager Jamie tied up. Surprisingly, it’s only Kirsty who manages to get through to Stewart. He reveals that he’s anxious about “Bruce”. But when Jay examines Jamie he finds chemical burns – has Stewart tortured his captive?

Meanwhile, Jordan has had a blackout. He gets to work late, dismissing Zoe’s questions about his head wound. Henry and Jordan tell hospital board member Robert that the ED needs his funding, but Robert coolly explains that they have to prove they deserve it first. Increasingly pregnant Shona is also back and asking for money, but Charlie is deeply sceptical – especially when he finds a bottle of vodka in her bag.

Yuki is finally back at work, but can he cope when a patient he’s treating dies?