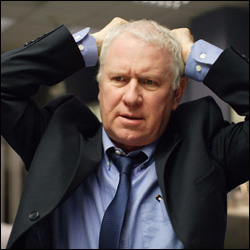 Zoe continues to pull the wool over Jordan’s eyes about her “pregnancy”, Lenny and Yuki take the law into their own hands with worrying consequences and an old Casualty favourite returns to the Emergency Department in need of treatment.

After lying to Jordan that she is pregnant, Zoe continues her fertility injections in a desperate attempt to conceive before he finds out. But after treating an assault victim she realises the destructive power of lies and breaks off her relationship with Jordan, without actually admitting the truth. Jordan won’t be put off that easily; dismissing her outburst as hormones, he asks a very surprising question…

Meanwhile, Lenny is determined to find evidence of Robert and the Ludlow Foundation’s complicity in the drugs trial cover-up and enlists a reluctant Yuki to help him break into Robert’s house. Finding the evidence they need, the pair narrowly escape being caught but their actions cause a trail of destruction. Afterwards Yuki turns on Lenny, angry he cares more about the evidence than their friendship. Will Lenny get the evidence he needs to confront Jordan and can his friendship with Yuki withstand this test?

After having Shona arrested for theft, Charlie misses her trial; but the teenager thanks him for his intervention, and seems genuinely transformed. But later, Charlie is stunned to discover an old friend in resuscitation, just as she starts crashing…