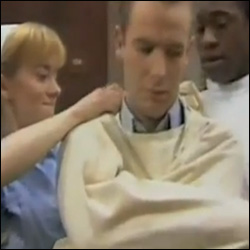 Charlie is attracted to a Social Worker, Trish Baynes, when they meet at a bereavement counseling session. Beth finds out she is to be sued for negligence.

A teenage runaway, Penny, is brought in after being poisoned by carbon monoxide. Duffy finds out she is a prostitute brought in by an older man, Geoff Marks, who is also found to have been poisoned.

18 year old Danny nearly drowns in a pool, trying to impress his friend, Graham’s sister, Shelley. He arrests as he is brought in to CRASH.

Kelly comforts a confused shoplifter, Mary, who had collapsed and is now talking about her baby. Kelly persuades Beth to call Social Services. Trish and the paramedics go to her house and discover her baby is dead as a result of neglect.

A girl, Jeannie, is brought in with a broken arm after falling down the steps of a slide, while out with her Dad, Matthew and her brother. Her divorced parents argue, causing Matthew to have an epileptic fit. The mother, Claire, wants him to have nothing to do with them, despite Duffy’s best efforts.

Kelly and Ash tie Jimmy to a straight jacket, but he accidentally shouts abuse at a non-amused Julian and another Dr, George Groves. Charlie finds out that Duffy is getting a lift home with a new man.

* Mary Tyler – shoplifter collapses and is malnourished – her baby is found dead at home from neglect.

Geoff : OK, first you get a cup of tea and then you get out. I’m sorry but that’s the way it is. Come on it’s time to get up, hey show’s over! (keeps trying to wake Penny up)

Trish : Thought I’d write my notes, bawl my eyes out, that kind of thing.

Charlie : Well, er, I’ll see you around then.

Trish : Yeah (walks off, but looks back)