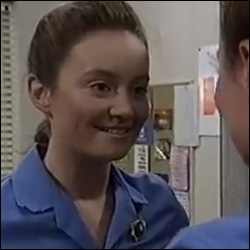 When seven year old Nicky falls off a garden swing a knocks himself out, his mother, Janice, is reluctant to have him taken to hospital. In casualty her obstructive behaviour arouses suspicion especially when she tries to sneak away. Tom Harley consults Janice’s medical records. Janice and her son have had Aids tests and, terrifies of learning the results, Janice had wanted to avoid the hospital. Able at last to face the truth. Janice learns that, although she is HIV positive, her son is unaffected.

Both at home and at work, Mr Paice is tense and unhappy. His wife overreacts when he is late for lunch, and, back at school, he is unable to cope with a class and breaks down. The headmistress suggests that he sees a doctor, and at Holby his body is found to be covered with custs and bruises. He blames school bullies, but infact he has been suffering violence for years from his wife.

A mother arrives with her children, who are suffering from diarrhoea and casualty staff find themselves dealing with an outbreak of dysentery.

[Mary is in the staffroom. She looks in the mirror then heads out of the staffroom, looking over the railings down to reception. She then heads downstairs for her first day in A&E.

[Duffy then takes her letter of resignation from a drawer in admin, and goes to put it in Charlie’s office, leaving it on his desk.]