Jac is back at Holby to help out. She tells Ric she wants to apply for the position of his registrar.

Meanwhile, Diane comes in to pick up some research papers and [ID 1443]Mark[/ID] seizes the opportunity to quiz her about Frank’s DNA test. She tries to cover for Tricia but eventually reveals the truth. Mark is horrified. That evening, Chrissie and Mark go out for a drink. Chrissie tells him that she thinks he has been acting strangely because he wants to move on again – Mark decides to keep the truth to himself.

Myrna Morrison accompanies her sick boyfriend, Gerry, to the hospital. Jac, along with [ID 1535]Matt[/ID], is eager to solve the mystery of his condition when they discover he has lead poisoning. They eventually find out he has a lead bullet in his bum from his time in the Army, however they make his injury seem more heroic when talking to Myrna.

Two brothers, Connor and Robert are admitted following a fight. Their mother, Caitlin, comes in to visit Robert, who has a beer glass cut in his chest. Caitlin has negelected Connor over the years, blaming him for his irratic behaviour as a child. Mark discovers Caitlin was a former drug addict whilst pregnant with Connor, and reveals to Connor that may have caused the condition he suffers now.

Jess returns to work for the first time since Paris’ death but old memories are brought to the surface when she deals with a young boy, Kieran, with a damaged spleen. She discovers old bruises and a cigarette burn on his body, and when he reveals his step mother hurt him, she calls a Paediatrician who then wants to refer the case to Social Services. Lola questions her motives. However Kieran later admits he lied because he was jealous of his step mother’s relationship with his dad and really he is being bullied by children. Jess is upset at getting it wrong.

* Caitlin is annoyed with Mark’s meddling, ‘Anyone who tries to undo the past is a fool,’ she tells him.

* Chrissie shares a heartwarming speech to Mark about what a father means to her, ‘They fill a space in your heart that no-one else can’.

In this article:HC Series 8, Peter Lloyd

Episode Summary Lola’s daughter, Cleo, arrives in the department with her ill boyfriend, Andy. Andy is suffering anaphylactic shock from a tetanus boost and... 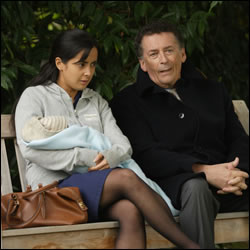 S11 E12 (6 Jan 09) : No Word of Farewell by Peter Lloyd Episode Summary Daisha has gone missing. Mark is worried and contacts the...

Episode Summary Helena Bosman is readmitted and Diane operates on her. Furious about the treatment Helena has received, her husband, Don, makes a complaint...