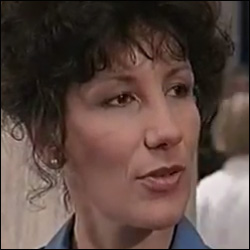 Staff Nurse Rachel Longworth starts work at Holby. Ash is promoted to Charge Nurse, and calls for Karen’s advice when dealing with a woman whose perm has burned all her hair out.

A young mother arrives with her little son, who has stopped breathing. She says that he has a heartdefect. Mike gets the boy breathing unaided and orders x-rays. He can find nothing wrong with the boy’s heart, but he does find a broken collar bone which has begun to heal. It emerges that the woman has abused her child in the same way that she was abused by her father when young.

A debt collector tells a woman that she can pay her debt by sleeping with him. Disgusted, she pushes him downstairs and later throws herself in the canal. Josh rescues her, and she is taken to Holby. The debt colelctor turns up and threatens her. Her son arrives too and demands an explanation. She blames her son for wasting all her late husband’s money on worthless business schemes.

A cricket match ends abruptly when an old man who is bowling aims the ball at the batsman’s head, causing a nosebleed. Already worn out, the bowler himself collapses, and both men are taken to Holby. Neither is seriously injured.

Karen falls asleep on duty, and Mike tells her to take time off so that she can concentrate on her exams.