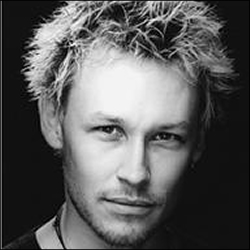 PARTNER : Dating Gemma Wardle, from Manchester, who he toured with in Les Miserables.

TRAINED : Went to Llantwit Fardne school in South Wales and was the year below Anna Mountford. Spent four years with the HTV Wales TV Workshop, before attending the Welsh College of Music and Drama.

PREVIOUS JOBS : ‘When I was 17 I had a job in a hotel on breakfast shifts. The weirdest thing about that job was the strange requests I got from some of the female guests. It was quite an eye opener and I soon learnt to deliver food, take my tip and leave sharpish. I lasted two weeks.’

ON CHARACTER LIAM : ‘He’s very similar to me in many ways. We both get on well with people. Liam will talk to anybody, it doesn’t matter who they are or where they work and that trait is very easy for me to associate myself with. I think I am, like Liam, quite caring and a good listener. Liam can be outspoken and could be described as hot headed, but is sensible enough to know how far to push.’

SIMILARITIES WITH LIAM : ‘I’m quite similar actually. Which is really weird because when I first came for the audition and read the brief I said, ‘OK, I think I can do this’, which was quite a relief actually. Liam’s a good listener, gets on with people and I think I’m like that. He has a little bit of a wild side and I have been known to have a little bit of a wild side occasionally!’

WHO WOULD PLAY HIM IN A MOVIE OF HIS LIFE : ‘It would have to be someone with a similar outlook and attitude . They wouldn’t necessarily need to be similar looks wise, that wouldn’t bother me too much, although I’d be really offended if it was someone really ugly! Keanu Reeves is totally into motorbikes and rock, so he would be good, although I’m not sure about his acting style.’

HOW HE RELAXES : ‘I ride my motorbike. I like hitting the open road, especially in summer. It’s great being out in the countryside, and catching the sunset on your way home.’

ON FANS : ‘It’s flattering but can be embarrassing – especially if your fans turn a bit obsessive. One Japanese girl followed me around the UK, flying all the way from Tokyo to see me. She even finished with her boyfriend because of me!’

HOW HE GOT INTO ACTING : ‘Pure fluke. I was about 10-years-old. My mum took my gran to some sort of women’s knitting night or something. They went on the wrong night and actually turned up on the amateur dramatics night. My mum got roped into doing a show because they were short on people, I watched it and thought that it looked like a good idea. Then the next show they had a slot for a young boy, so I auditioned and got the part.’

MOST VIVID CHILDHOOD MEMORY : ‘I spent most of my childhood on two wheels riding my bike. I was desperate to get a motorbike. It wasn’t until 1995 that I eventually got it.’

MOST FOOLISH THING DONE : ‘After leaving school, some friends and I went on a school ski-ing trip to make up numbers. We were meant to be setting an example to the students. However, after getting drunk on cheap Austrian wine, I was dared to take part in a dash around the hotel late at night – naked. I got stuck hiding behind a rubber plant in a glass-fronted reception, for 45 minutes. Never again!’

WHO HE ADMIRES : ‘The thing that I admire most now is when I watch the Discovery Channel and see all sorts of footage of what people went through in all sorts of wars. Those are the people I respect, the ones that gave us the freedom we’ve got now.’

WHAT MAKES HIM ANGRY : ‘People talking on their phone in cars that don’t look where they’re going. I’ve had a couple of accidents on my bike over the years, none of which were my fault.’

HEALTH ADVICE HE IGNORES : ‘My diet is the worst. But I’ve got a high metabolism, so I’m lucky and get away with it.’

WHO MAKES HIM LAUGH : ‘I recently bought a Charlie Chaplin DVD and I loved Harold Lloyd when I was younger. The Fast Show makes me laugh.’

* Adrian once promoted Cadbury’s Mini Rolls outside a supermarket. ‘We had a bit of a scam going – we were meant to cut them in half to offer customers, but we cut them into four, so we could eat them at the end of the day. We got caught eating the profits, but I talked my way round the supervisor and stuck out the job for four days.’

* Adrian suffered a road rage incident on his motorbike in 1998, which went to court. He found the incident left him with lots of strong feelings, and suffered nightmares and flashbacks when it first happened.