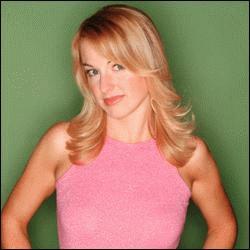 In S17 E22, Bex – a sassy, no- nonsense blonde with attitude enters the department as the replacement receptionist for Jack (who has gone on the run). She breezes in and promptly puts her foot in it by ridiculing Jack infront of his brother Tony and girlfriend Nikki. In S17 E29, Bex spots Jack, who has returned to visit Tony. She maliciously reports him to the police. In S17 E30, the A&E department is plunged into darkness following a power failure. Bex evacuates the ‘walking wounded’ in typical tactless fashion. In S17 E32, Bex is shocked when her ex-husband – new paramedic Luke – arrives in the department. She used to be married to him when he was a footballer. Roxy happily spreads the gossip round the department. In S17 E36, Bex overhears Jack telling Tony that he is going to proposed to Nikki. Unable to keep the news underwraps, gossip spreads like wild fire. Luke is called to an incident at Holby football ground where he used to play. Bex reveals that it was the injured player’s vicious tackle that ended Luke’s football career. In S17 E39, Bex seizes the opportunity to flirt with Dillon, next episode – the day of Jack and Nikki’s wedding – they wake after spending the day together. However tragedy strikes later in the day, when Dillon is involved in a shooting and ends up fighting for his life in A&E.

Following the train crash at the beginning of the series, in S18 E2 after the mother of a survivor of the crash unfairly complains to the Press about her treatment at the hands of the hospital staff, Bex loses her cool. She gives the woman a piece of her mind unaware that the argument has been caught on camera. But the woman later apologises for her outburst and gives Bex a £10 contribution to start a disaster fund. In S18 E5, Bex, is flattered to be asked to model by the RRU photographer. In S18 E7 Roxy lets slip to Bex that she really is pregnant – but will gossip Bex be able to keep the news to herself? In S18 E9 Bex begs to accompany Harry to his photo shoot with Lord Lichfield. In S18 E10 Bex sees Roxy rushing around and accidentally blurts out that she should be careful “in her condition”. Unfortunately, Tess overhears and guesses she is pregnant. Roxy is furious with Bex and the pair argue. In the heat of the moment, Bex tactlessly tells Luke the news too. In S18 E13 Bex still has a tremendous thirst she cannot satisfy and she looks terrible. After one too many visits to the ladies’ she breaks down, feeling she can no longer keep it together. A concerned Tally asks Harry to take a look at her but it only makes matters worse and Bex storms off home. In S18 E14 Bex arrives late, looking pale and lank. She is scared of what might be wrong with her but Luke stays by her side and persuades her to get checked out. She is horrified when the results show she has diabetes and rushes out of the department in a state of panic. In S18 E15, following the shock news that she is diabetic, Bex is distraught. She refuses to answer the door when Luke, concerned that she has not received any insulin, comes to check on her. Instead, she drowns her sorrows in wine and cigarettes, unaware of the danger she is putting herself in. In S18 E18 Bex rallies staff to watch CCTV tape showing Luke and Lara’s intimate relations on hospital property. In S18 E35, Luke turns up in the department, bored during suspension. Bex asks him to do some filing to distract and he asks her out for a drink as a thank you. In S18 E36 Bex is keen to cheer Luke up, so they go speed dating. When Luke realises that Bex has all the qualities he likes in a date, there is sexual tension between them. In S18 E42, Bex is elated after her evening with Luke. She is convinced that they have a future together and confides to Claire that she is in love with him. When Bex tells him she has planned a romantic dinner for two, he admits that their night together was a mistake. Bex is crushed but vows to Claire that she will get her man. In S18 E45 at Lara’s hen night, Bex tells Luke she thinks they should get back together. He says categorically that this will never happen. Later, Bex tells Claire to keep an eye on Luke as he is talking to another woman, but Claire ends up kissing him. On Lara and Simon’s wedding day, in S18 E46, Bex overhears Luke and Claire talking about their kiss; betrayed and upset she fights Claire.