Simon starts to date attractive and confident Jane Winters soon after his fling with Colette. He meets her in a club in S17 E16 and wanders up to the bar, beginning his usual pick-up banter. Jane seems to be more than a match for Simon though and the pair exchange witty repartee. He’s disappointed when she leaves with another man. But all is not lost; she’s left her card with contact details.

In S17 E18, the pair share breakfast. Simon is intrigued by Jane’s coolness and asks if he’s going to see her again – she says she’ll call him. The next episode, Jane arrives in A&E with a sick friend, Liz. Simon is happy to see her but Jane is more concerned about her friend, who consistently denies that she has a problem, despite obvious stomach cramps and weakness. She is soon diagnosed. Liz urges Jane to be honest with Simon about who she is and give herself a real chance to be with him. She admits she wants to but says she’s scared. Liz tells her not to end up like her, an ageing high class tart! When Jane bumps into Simon outside it looks like she’s ready to tell him the truth – that she is an escort – but she just can’t bring herself to. They end up kissing and she agrees to go out to dinner later.

However, Jane feels herself falling for Simon and knows she must tell him the truth. When he arrives to see her she tries to tell him that he should leave her alone. Simon is oblivious to her attempts to distance herself from him, so Jane blurts out the truth. Simon is angry, and throws the bottle of wine he’d brought her to the floor. Even so, he cannot stop thinking about her, and later tells her he still wants to make a go of things. Jane tells him that it would not work, but it is obvious she is drawn to him too. Simon resolves to turn a blind eye to her job so long as he can be with her. In S17 E25, Jane is brought into the department after falling down some stairs. The staff gossip, which leads to Jane choosing to discharge herself. Simon follows her and tells her that he loves her in front of the department.

In S17 E27, during a lunch date, Simon is concerned about Jane ’s clumsiness and rushes her to casualty for a scan. When Jane is told she has a tumour, she is stunned and makes Simon promise to look after her if anything goes wrong. Jane needs an operation and this takes place in S17 E28. The next episode, Simon visits her but they realise she has temporary paralysis down one side of her body. Jane is scared that this will last, but Simon says it shouldn’t do. She says she could really do with a burger and chips and wants to get out of hospital.

In S17 E34, Simon is at Jane’s house trying to help her get dressed. She appears very reluctant to accept his help. Their relationship comes to an end. 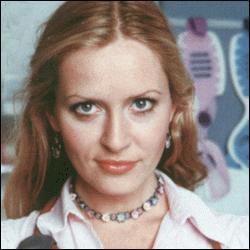