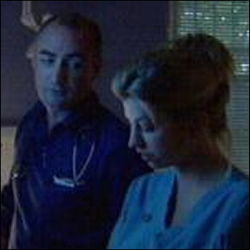 Adam tells Holly he won’t be able to do the parachute jump as there’s a family wedding that day. He says, “You’ll have to manage without me.” Holly tells him that she’s not jumping – she’s scared of heights.

Walter Burnley arrives home to find his wife Lizzie on the floor, semi-conscious, after a fall. He calls an ambulance; Mel and Finlay arrive and start treating her. She is very cold; Walter says the heating packed in that morning. She is taken to A&E, where they try to warm her up. Their son and daughter-in-law, Philip and Sarah, arrive at their house to visit them and are told by a neighbour where they are. They go to the hospital. Philip talks to his dad, asking why the heating wasn’t on; Walter says they’d left it off to save money so they could buy presents for their grandchildren. Philip says it wasn’t necessary but Walter is jealous of Sarah’s parents, who are more well-off than they are – he won’t even go to Philip’s house for fear of seeing them. Philip says that Walter’s too proud; he’s offered to help him financially but Walter would not accept it. They agree to spend Christmas together at Philip’s after Lizzie has had a hip operation.

Owen Lewis has been feeling ill; his mum Bev has taken the day off work to look after him. He throws up and Bev’s partner April persuades her to take him to A&E rather than their GP. Bev calls Owen’s father Jonathan when they arrive. When Jonathan gets there he wants April to leave; Bev asks her to stay but April goes, saying she’s not wanted. She tells Bev that it’s always Jonathan she turns to when there’s a problem, not her. Bev says this is about Owen, not them. After asking Bev and Jonathan to wait outside, Holly talks to Owen and finds out what’s wrong. She discovers one of his testicles is twisted, causing him immense pain; it needs an operation to correct it; this should be simple but in the worst case could lead to the testicle being removed. Jonathan says that if he’d been at home Owen would have talked to him about it, but couldn’t talk to a woman; Holly says that Owen wouldn’t have wanted to talk to either parent. They start arguing and Holly suggests that they sort the situation out for Owen’s sake. Bev realises that Owen knows about her and April. April talks to Jonathan, saying she wasn’t looking for a married woman, but it happened; she says that Jonathan doesn’t have to lose Owen as well. As Owen goes up to theatre, Bev is with him and Jonathan joins them; April isn’t going to come but Owen calls her over too.

Emma Lister arrives home to find her dad Simon in bed with her best friend Beccy. She screams at her dad, saying it’s only a year since her mum died, and says she hates both of them. She and Beccy start fighting and they both end up falling downstairs; Beccy falls first and Emma lands on top of her. They call an ambulance; Emma just has a few bruises but they suspect Beccy may have broken her neck. In A&E, Max does a pregnancy test before doing a pelvic X-ray and finds that Beccy is pregnant. She is very upset and cries out for Emma; Tina has to hold her down to keep her still. They find she has fractured a bone in her neck; it could lead to her being paralysed. Simon and Emma go in to see Beccy, who tells them she’s pregnant. Simon says she has to get rid of the baby. Emma tells him he can’t decide: it’s Beccy’s problem, not his. She says he stopped being her dad when she found him in bed with Beccy. Beccy asks Tina to get Simon out of the room and Tina makes him go. Emma and Beccy apologise to each other and are friends again; Emma says she can’t go back home so Beccy says she can stay with her and later they’ll get a flat together. She says she can make her up her own mind about the baby later on. Emma promises to look after her.

Sean, who is revising for an exam, has been asking Max to put in a good word for him with Tina. Max talks to Tina and guesses that she went with Chloe when she had the abortion. Tina says, “Sean would never have thought of that.” She tells Max she wishes Sean could be a bit more like him. Later Max asks to speak to her again; Tina goes to his office and asks if he’s going to tell her that Sean’s not all bad and that she should give him another chance. Max is looking at her, not thinking about Sean, and says he wasn’t going to say that, but when Tina asks what he wanted he says “Nothing.” Tina smiles and says goodnight. She leaves, but looks back at his office, smiling. Max comes to his office window and watches her as she walks off.

– Beccy Staples, a 17-year-old girl that falls down some strairs, finds out she is pregnant as well

– Owen Lewis, a boy with one of his testicles twisted

– Peter Braithwaite, a clown that has broken his hip

[Mel and Fin bring in a patient.]

Mel: This is Peter Braithwaite.

Holly: So, how did you manage to do this, Mr Braithwaite?

Bobo: I fell off a trampoline , didn’t I?

[Tina walks out of Max’s office. She turns around and looks at Max through the window, before walking away, smiling. Max walks to the window and watches her leave.]

In this article:Cas Series 14, Sam Wheats 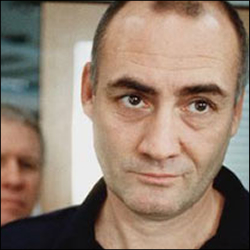 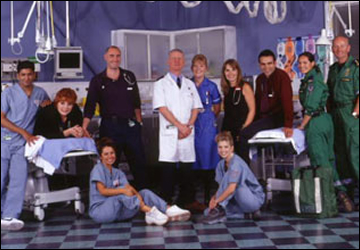 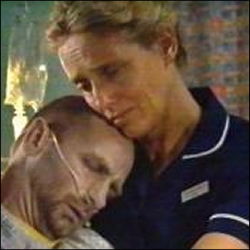