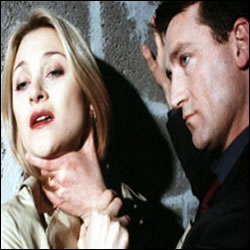 Lara and Simon await the outcome of the Medical Registrar position. Simon says he is not even bothered about getting the job.

A shooting occurs in a busy street. Policeman David Collier, from last episode’s incident, arrives to question witnesses and conflicts again with Lara. Scott is brought in with a shot wound to his chest and dies. A mother, Sharon and her young baby, Brandon, are also taken in. Sharon faces an operation. And Tony comforts an elderly man, Roy, whose dog has been injured. The NSPCA collect the dog, who survives.

An Asian girl, Joely, is knocked unconscious in a car park when a van hits her. In A&E, she asks Anna to help contact her birth mother, Safina, who she was supposed to be meeting for the first time, without her parents knowing. After failing to contact her by phone, Anna visits the mosque to tell Safina where Joely is. Tony warns Anna for becoming too involved, as she has drawn on her own experience of not being in contact with her father. Safina hangs around at the hospital hoping to see Joely – and her parents, Martin and Monica are upset when they realise who she is. But on Anna’s advice, they let her see Joely.

Scott’s brother, Virgil, is later brought in also with shot wounds. He also dies in CRASH. Lara informs their mother, Frannie, while David Collier tries to ascertain why he shot his brother.

After a visit from his brother Stuart, Claire also comes to see Simon. She says she doesn’t want to marry Stuart tomorrow but be with Simon. Simon tells her, he doesn’t feel the same about her, and as she walks away, he wishes that she knew how he really felt.

Harry tells Simon that he has got the Medical Registrar job. Lara is disheartened. Roxy arranges a drink to celebrate. Simon then asks Roxy to be his guest at Stuart’s wedding.

Lara has been hinting to David all shift that she may spills the beans on his attack against his wife. As she leaves and goes to her car at night he corners her and pushes her to the ground. Lara attempts to grab a brick in defence.

* Roy – witness to shooting. Worried about his heart.

* Joely Davidson – broken femur and suspected neck injuries after being hit by van.

Roy is walking his dog. Colin and his wife Sharon and baby are in car traffic;

Sharon : Who for – your son or your Mum and Dad?

Colin : What if the soufflé’s come out of the oven?

Lara is walking to her car after an evening shift, David corners her;

David : Where did you learn to get so tough?

Lara : Why do you wanna try it on with me? (she tries to get in car, but he pushes her to ground)

David : Not fighting back now are you? (she tries to grab a nearby brick)

In this article:Andrew Holden, Cas Series 16