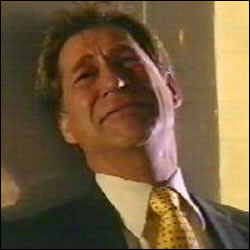 Tally persuades her mum, Beth, to take her for a promised driving lesson after Harry makes up an excuse for getting home late. The lesson turns into a nightmare when Beth grabs the wheel from Tally to avoid an oncoming car and crashes into a tree. Tally desperately calls for help, but can’t get through to her dad, who is having a secret dinner with Selena. When Harry eventually gets to the hospital and is given the bad news, he can’t bear to look at his daughter.

During a lunch date, Simon is concerned about Jane’s clumsiness and rushes her to casualty for a scan. When Jane is told she has a tumour, she is stunned and makes Simon promise to look after her if anything goes wrong.

Merlin is also left feeling shocked after an adopted patient dies, prompting him to seek out his real parents. Meanwhile, Nikki tries to persuade Jack to return to Holby to help his brother, but he refuses.