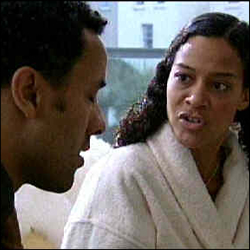 Two cyclists, Ricky and Karl, crash into a ditch during a training session. Rickyis unconscious with a leg fracture, while Karl has a fracture to the arm. Karl’sfather seems adamant that the crash was Ricky’s fault but Karl defends him asLuke and Nicky work on the two patients. The cyclists are brought into thedepartment, followed by Karl’s father and a girl called Leanne. Karl wants tostay with Ricky, calling him “his best friend”.

Simon is at Jane’s house trying to help her get dressed. She’s appears veryreluctant to accept his help. Meanwhile, Jack goes to visit his father Eddie,who is very ill after his operation to give son Tony a kidney. The doctor tellsJack to prepare for the worst, as Eddie could not breathe without the aid of theventilator. Jack isn’t happy with the doctor’s prognosis for his father and goesto see Harry for a second opinion. Although Harry gives the same verdict, Jackis pleased he’s spoke to someone he can trust. In the emergency department,Colette tells Bex she’s going for a scan of her unborn child. Bex jokes aboutit, reminding Colette to show her the photos later on.

A woman called Christina Ford arrives in the waiting room with colleague andboyfriend, Danny. While Roxy examines Christina, her daughter Susie arrives,telling Danny to stop making Christina problem seem worse than it is, shebelieves her mother is nothing more than a “sad alcoholic”.

Lara and Merlin treat Ricky in resuscitation, but when Lara asks Merlin tocontinue with Anna he refuses, saying things are going badly between them. Larawon’t let them work separately and when Ricky wakes, she breaks the news that hemay not cycle for a long time. Elsewhere, Karl’s father asks him why he andRicky ended up off their bikes. Leanne explains that she is expecting Karl’s’baby having been with Ricky, and had told him before training.

Jack visits Tony to tell him Eddie is dying – he has contracted MRSA septicaemia. Jack says he believes it’s his fault,but Tony is adamant he didn’t want Eddie to come back and didn’t want to accepthis kidney. In Casualty, Susie tells Simon how bad her mother’s drinking problemis, and when Christina vomits blood, they expect she has ‘oesophageal vareses’and is seriously ill. On telling Christina she asks for her daughter not to betold. Later on, Simon speaks to Susie anyway, saying although Christina is veryill; but she won’t die if they can help it.

Karl goes to see Ricky and they argue about Leanne and her baby. Karl says hewants to be with him, not Leanne, but Ricky sends him away. Elsewhere, Karl’sdad comforts Leanne, telling her they’ll be able to offer help, even though shedoesn’t want to tell her parents about the pregnancy. Karl comes to talk to thepair, revealing he is gay and can’t be with Leanne. Simon receives a messagefrom Jane before she turns up in reception asking to speak to him. She tellshim she doesn’t want to see him again and is sick of him trying to help, sheleaves warning him not to try and find her. Meanwhile, Colette reveals toComfort that her baby has club foot and she can’t bring herself to tell Josh, ashe isn’t the father. She is also terrified that the baby’s condition may indicate other abnormalities.

Outside, Danny tries to make sure Susie isn’t going to reveal that they haveslept together. Later, Susie tells Simon she is scared of leaving her motheralone. Simon comforts her with his own experience, saying that sometimes peoplejust can’t handle life and love. Later, Simon goes down to the river, and throwsin one of Jayne’s necklaces. Inside, Anna receives a phone call from her mum whoshe doesn’t want to speak to, Merlin says she should hear her out and wants tomake another go of their relationship, despite it being incest.

Christina’s condition worsens, and Simon has to insert a tube into heroesophagus to control the bleeding. She asks Simon not to let Susie be therewhen she dies and at 20:50 she is pronounced dead. Susie argues with Danny aboutwhere she’s going to go, he says she’s too young to cope but she replies thatshe’s coped alone for many years.

The doctor tells Jack that they’re withdrawing treatment from his father, andwithin minutes Eddie dies. Jack sits with him, and says he’ll “always love him”.having been told hearing is the last sense to go. Meanwhile, Karl goes to seeLeanne, he says he doesn’t love her but will help as much as possible with theirchild. He still wants them to be friends, even though he says his relationshipwith Ricky isn’t just a phase.

Merlin goes round to see Anna, but she slams the door in his face, refusing totalk. He says he loves her and doesn’t care if they are brother and sister.Anna’s mum arrives, and Merlin asks her what she’s doing. He accuses her ofrunning his life, not once but twice.

Merlin: What are you doing here?

Merlin: She doesn’t want to see you. Now we’ve both lost her because of you.

Anna’s mum: I never meant for this to happen, did I?

Merlin: I don’t want to see you again, ever. You’ve ruined my life, not once; you’ve ruined it twice.