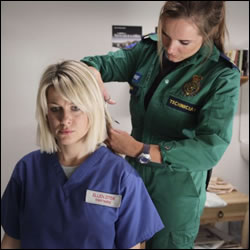 Nina comments that Ellen looks really well and Ellen says she feels much better – she may even go for a holiday. Nina worries and doesn’t think she should go but Ellen says she needs a break. Nina sees a bandage on Ellen’s arm, Ellen says she burnt herself on the oven. Nina corners Ellen and asks why she is lying about this holiday. She doesn’t think Ellen is coping well with the chemo. She worries that Ellen needs help and offers to come and live with her but Ellen stubbornly says she doesn’t need help.

A young woman, Polly, is brought in after falling from a pier, wearing a wedding dress. Abs and Ellen are both not convinced when she claims to have been jilted at the altar. She finally opens up to Ellen, admitting she was trying to contact her dead mother after reading a book, to ask whether she should keep her baby. Ellen also reveals her own mother also died of cancer, and finally gets her to talk to her father, who has never really spoken about her mother’s death.

This leads Ellen to then confess to Nina she needs to go into hospital but she didn’t want anyone to know. The chemo is not working and she needs a much stronger form of chemo. She takes Nina into a room and tells her she doesn’t want her hair to fall out in clumps during the treatment – she wants Nina to cut it off now. Nina says no but Ellen says if Nina won’t do it then she will do it herself. Nina cries as she cuts her sisters long blonde locks off.

Elsewhere, Maggie and Charlie arrange to go out on a date but soon realise they have been set up and that Louis is the culprit. Maggie, who is celebrating her 40th birthday, is shocked when her husband, Steve, turns up saying that he wants to talk to her. Steve says he has a job teaching English in Malaysia, and wants the children to join him there. She is not happy at the news.

Meanwhile, Luke has got Sol working in the paramedic station cleaning ambulances. However when on a shout, Sol’s friends turns up and break into an ambulance. When Luke returns back he is devastated that Sol has abused his trust.

A man, Billy, collapses with chest pains after just meeting the wife, Sandra, he hasn’t seen for 20 years. His girlfriend, Jan, is upset to learn he walked out on her and his 3 year old daughter and Sandra has turned up wanting answers. Billy keeps suffering cardiac arrests and is upset to also learn that his daughter died when she was 7.

A spider bites two teenage workers at a supermarket, who are both vying for the attention of their female colleague. Alice surprises staff with her knowledge of spiders.

* Craig and Fitzroy – bitten by spider.

* Alice is at ease with the spider in reception, much to Tess’ discomfort. ‘Hello gorgeous, what have you been up to then?’ she says.

* As Nina cuts Ellen’s hair, she emotionally says ‘I don’t want to lose you – I feel like I’ve only just found you’.

* After having her hair cut, Ellen says ‘Well I need a new look – the old one was getting boring.’ Nina is full of admiration ‘I’m so proud of you’ she tells her sister.

In this article:Cas Series 20, Katie Hims 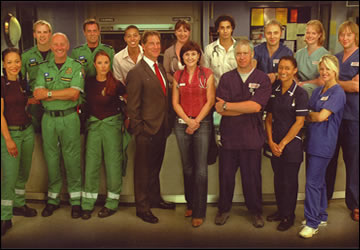