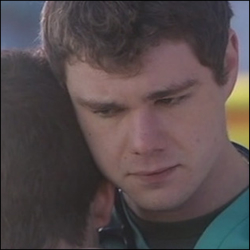 There’s the usual morning madness as people rush to get ready for work. Charlie yells at Louis to get a move on, but Louis says he has a free period. Charlie, however, is adamant he is driving Louis to school following last week’s discovery that Louis has been truanting. Later that day, Charlie receives a call to say Louis has been excluded. Not at school when he goes to pick him up, Charlie goes home and is shocked to find cigarettes, expensive trainers and a roll of 10 pound notes in his son’s room.

TC, meanwhile, frets about seeing Human Resources and what the outcome of the meeting will be, following the revelation that he is the author of the derogatory blog.

Fiona and her partner, Mike, and her son, Alistair, are getting ready for school and work, but Fiona is feeling queasy – something’s not right and she is rushed to hospital. Her symptoms lead Toby to ask if she might be pregnant, but she laughs and tells Toby it is because of a change in her HIV medicine and that her family don’t know about her HIV status.

At a warehouse, an old security guard, Howard, rests his weary feet when he gets a call from his colleague, Jimmy, asking him to check the east warehouse. He doesn’t do this, so doesn’t see that Jimmy is being held at knifepoint. A masked man then ram raids the door and knocks Howard over, leaving him seriously injured on the floor.

In the ED, Ruth is excited about the lecture to be given by Professor Camille Windsor on trauma surgery. She tells Toby that he should stay on the floor, while she goes – which he’s more than happy to do. Following the lecture, Camille observes in the ED. Toby messes up, but Maggie tells him he shouldn’t be concerned what Camille or anyone else thinks of him. Toby reveals the reason he is so concerned is because Camille is his mother. With his confidence at rock bottom, and questioning his motivation to work in medicine, he decides to resign.