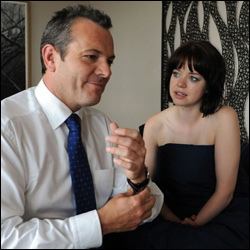 Ruth wakes up in Jordan’s bed and revels in what she believes is the start of a new relationship. Jordan, however, clearly feels differently and later rejects her outright – to her utter humiliation. Upset and feeling lonely, Ruth turns to Toby for support, but instead gets the surprise of her life when she catches him in bed with someone unexpected.

Dixie and Jeff, meanwhile, are called to a stabbing at a farm, where they find a man dying and a disturbed young man clutching a knife. As events unfold, however, it transpires that there is far more to this incident than meets the eye.

Elsewhere, the documentary about Holby’s emergency department is to be shown on TV. While Kelsey can’t wait to see it, Dixie is terrified of what it might show. All day long, she takes her nerves out on Jeff, before finally admitting to him how scared she is that the documentary will show she caused the crash. With Jeff’s unflinching support, she summons all her courage and they watch the documentary together.