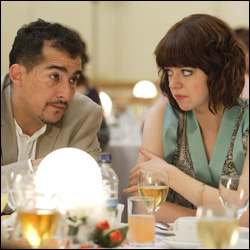 Injured pet shop proprietor Malcolm faces the loss of his home and business and the F2s are given their first patient to treat alone.

During a heated discussion with his landlord, Malcolm slips while holding a fish tank and suffers severe lacerations. While Malcolm is in casualty, the landlord is forced to reveal that he wants to build a car park on the site of the pet shop and Malcolm and his wife, Brenda, face losing their home and livelihood. Yuki needs to use all his diplomacy skills when, at the end of his tether, Malcolm decides to take matters into his own hands.

Later, Yuki, May and Lenny are thrilled when Adam gives them their own patient to treat – Ruth’s friend, Amir, who has a history of heart problems. Ignoring advice from Jordan, however, the F2s decide to follow their own course of treatment. Things go from bad to worse when the patient then goes missing. The F2s conceal their panic but are individually distraught.

Elsewhere, paramedic Polly receives some disturbing news about Alistair, which she responds to calmly. However, something is affecting her normally sunny disposition and she is behaving strangely around certain patients.

In this article:Abi Bown, Cas Series 24