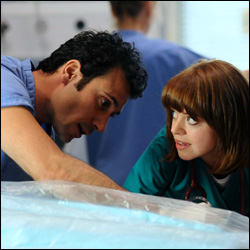 Ruth faces a festive family crisis, Lenny considers the prospect of unwanted early Christmas leave and Zoe continues to enjoy a bit too much seasonal “spirit”.

As the competition for the fellowship continues, May is frustrated by always being regarded the least-promising of the F2s and plays a trick on Lenny which has far-reaching consequences. Acting on May’s misinformation, Lenny mistakenly tells two sisters that their father, Barry, has died. He is severely reprimanded by a stressed and furious Adam and it looks as if Lenny’s Christmas leave may be lasting a little longer than he would like.

Ruth, meanwhile, is looking forward to celebrating Christmas with a long-lost member of her family when she notices an heirloom has gone missing from her flat. As she’s plunged into a world of stolen phones, heroin overdoses and male prostitution, Ruth realises that she’s likely to face Christmas alone. Will this mean she’s ready to accept the support of ex-boyfriend Jay?

As matters finally come to a head between Jordan and Adam over Jordan’s role in the Emergency Department (ED), Jordan is forced to face the music over his future as a doctor. Meanwhile, Zoe continues to escape the stresses of her life through the bottom of a bottle.

Finally, the staff find out who is responsible for the string of disappearances in the ED. Is there a thief at large or could it be a secret Santa working in mysterious ways?