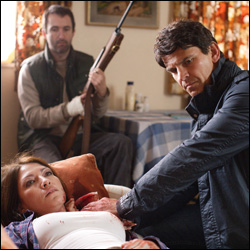 Adam faces a terrifying ordeal at gunpoint as he’s held hostage in a farmhouse.

Meanwhile, Zoe must choose between Jordan and Matt, while a face from the past makes a surprise return.On what would have been Harry’s first birthday, Adam and Lyn, who has been wounded, are being held at gunpoint by Lyn’s bitter ex-husband, Vince.

Feeling that he has nothing left to lose, Adam makes an agreement with Vince – it’s his life for Lyn’s. After she is released and taken to hospital, Adam stays to face his fate.

Although some kind words from paramedic Polly and a heart-to-heart with Vince persuade Adam that he may have something to live for after all, Vince reveals that he has rigged the farmhouse to explode when the heating clicks on. All Adam can do is hope to persuade Vince to get them out before the house goes up in flames.

Elsewhere, after spending the night with Jordan, Zoe is forced to reassess what she wants from life. Will the headstrong medic accept the proposal of the kind and steady Dr Matt, or will she take a chance on her old flame and sparring partner Jordan?

Following her humiliating rejection by Adam and the traumatic events of the day, Alice takes decisive action as a familiar face returns to Holby to settle some unfinished business.