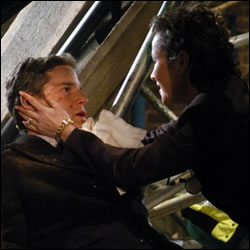 Will is left impaled on a pole and trapped underneath the scaffolding and debris after Jodie crashed into him. To make matter worse, another man, Dermot is impaled by the same pole, trapped under Will. Jodie gets out of the car and runs off. Connie and Mickie come to Will’s assistance, Connie tries to reassure Will that he is going to be fine. The paramedics are called and Comfort arrives at the scene. The scaffolding is dangerously unstable and could come crashing down on everyone at any minute. Will tells Connie he knows he is dying and that Jodie drove into him deliberately. Jodie sneaks into a laundry room and calls Mickie – leaving a message on her mobile saying she is injured and needs help. Comfort tells Connie that in order to treat Dermot they must separate him from Will – Connie refuses knowing that this could kill Will. The police tell Connie that Jodie was the driver of the car and that witnesses say that it was not accidental. Connie tells them that she is ill and cannot have gone far and that Mickie may know where she is. The fire-fighters move Will and Dermot together – they are still both impaled by the pole. Will and Dermot are taken into Darwin theatre. Connie manages to separate Dermot from the pole, Ric takes Dermot onto Keller wing to operate on him. Connie fights to save Will – tensions run high as they take him off bypass and see if he can sustain himself. Everyone breathes a huge sigh of relief when he can. When Will comes round he thanks Connie for saving his life, but his condition suddenly worsens. Connie is forced to open up his chest there on the bed and delve in to find the bleed. Connie does everything in her power to save him, but she is unable to help him recover a second time.

Mickie checks her phone and sees that Jodie has called. She runs off to find her, leaving Connie and Comfort to treat Will. Jodie tells Mickie that she did not drive at Will on purpose, she lost consciousness and her foot slipped. Mickie wants to go to the police but Jodie says that they will arrest her and will not believe it was an accident. Mickie warns her that she could die without medical assistance – she thinks Jodie’s lung is collapsing. Jodie convinces her to go and steal supplies to treat her. Mickie goes to take the necessary supplies, but a policeman stops her and asks if she has seen Jodie – Mickie covers for her. He tells her that witnesses say she deliberately drove at Will. Jodie talks Mickie through the procedure on her. Jodie swears that she accidentally drove into Will and tells Mickie she needs time to think about what to say to the police. She asks Mickie to borrow a car and drive her to another hospital so she has time to think. Mickie says she will try and borrow Lisa’s car. In the car park Mickie hears about Will’s death which makes her realise she cannot go through with this. She takes the policeman down to Jodie and she is arrested.

Jess is still recovering from her operation. Sean comes to see her with some news – he asks Jess to marry him. Zubin enters and Jess tells her that Sean has proposed. Later, Zubin comes to see Jess and warns her she is making a mistake. He tells her he wants to take care of her. Jess’s face lights up – thinking he wants to be with her. Zubin says he can give her a car and a house and financial security. Jess is furious, realising he just wants to give her money. She says she refuses to be his dirty secret and that she has given up waiting for him.

Dermot, who was involved in the accident with Will, has wife, Sandra, who is on the wards having had major surgery. Mark decides she should be told of his condition, against Lisa’s opinions. Sandra makes a run from the ward to go see him, but collapses on the stairwell. Mark, being the doting nurse, takes her up to see him after his operation.

* Will Curtis – dies from his hit-and-run injuries.

* Dermot Benson – abdomen injuries when scaffolding pole goes through him.

* Sandra Benson – diabetic who has had surgery for stomach problems.

* When Will told Connie he was going to die, Connie said ‘You’re not going anywhere till I say so Mr Curtis!’