It’s the day of the inquiry into Helena Bosman’s death. The post-mortem has revealed that the urethra had been cut during surgery but was not repaired properly. It was not done during the bodged cosmetic surgery, as the scars were too recent, but during surgery at Holby. This narrows it down to two culprits – Diane or Nick. Diane admits to Ric that she hid details in her post op report to cover for Nick. Nick however refuses to admit any responsibility and it looks as if Diane will take the wrap.

Chrissie is still acting coldly towards her mother. Elsewhere, the chemistry between Tricia and [ID 1443]Mark[/ID] is getting stronger. They are about to share a kiss, but an oblivious Chrissie interrupts them, and the moment passes. Later, Mark invites Tricia round for dinner.

Meanwhile, Joseph’s condition seems to be getting worse, and the others are beginning to notice his strange behaviour. [ID 1598]Sam[/ID] decides to hide his white coat that he is so obsessive about wearing. Whilst treating teenager Amber, who has a heart condition. Joseph is at first unsympathetic towards her until he discovers she has similar irrational rituals to him.

Prisoner Cameron Cooke is amongst those brought in after a riot. Cameron has lung damage following a stomach ulcer. His mother blames him for an injured officer, but Cameron claims it was revenge for them ignoring his condition.

An old friend of Nick’s, Austin Carey, has cancer of the pancreas. A previous hospital has diagnosed his disease as inoperable but he has come to Holby to blackmail Nick into operating on him.

* Ric tells Diane ‘You’re not the first person that man’s manipulated, no doubt you won’t be the last’, referring to Nick.

In this article:HC Series 8, Peter Lloyd

Episode Summary The story continues from Part One As news of the tunnel collapse reaches the hospital, everyone struggles to concentrate on their work,...

Episode Summary There is increasing tension between [ID 1535]Matt[/ID] and Donna over the death of Bridie. The pair are treating patient Jerry (who’s been... 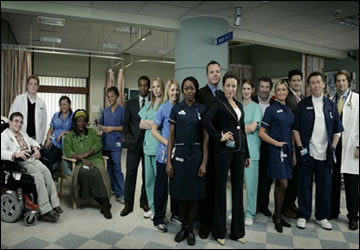