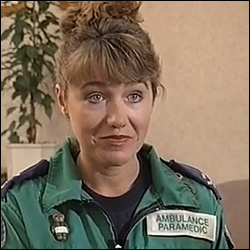 Claire Hollis goes to train for a gymnastics competition with her Dad, who is her coach. She discovers on the way to the gym that she has forgotten her inhaler, but her dad interrupts her when she starts to tell him. She doesn’t want him to know she has forgotten it as her parents are divorced, and she knows they will argue if she goes back to her mum’s house to collect it. During training, Claire’s dad pushes her hard. She struggles to breathe, and her dad brings her into hospital. She is taken straight into recus to be treated, but her dad is confident she will be okay. Claire tells Karen, who is treating her, that she wants her mum, but that she doesn’t want her mum to know that she forgot her inhaler. However, when her mother arrives, she finds out about the inhaler and argues with Claire’s dad. This causes Claire to have more problems with her breathing. Later, Claire tells Karen that she wants to stop gymnastics, but she is afraid of what her dad would say. Karen urges her to tell him. She eventually does, and he is angry, but finally accepts that it is what she wants.

Tom Dinning is brought in with a broken wrist after falling from a ladder. Later, when he is discharged, he goes to work at a skydiving centre. A man, Jon, turns up to take part. He goes up in the plane to do the jump, but is terrified. He finally does the jump and enjoys it. He takes no notice of directions shouted to him from Tom through a walkie-talkie, and lands in some trees. Panicking, he unclips his parachute and falls to the ground. He is taken in to hospital and discovers that he will be paralysed. His girlfriend, Sheena, arrives and tells Duffy that she was about to leave him, and now it will look like she is heartless, and leaving him because of his injury. Duffy urges her to stay with him. Sheena decides to, but when she goes into recus to tell Jon, he says he doesn’t love her anymore.

It is Michelle’s birthday. Her friends hire her a stripper, who dances for her in the Resteraunt. He walks into a waiter who is carrying a boiling pan and the contents get spilled onto his chest. When the paramedics arrive, he is in the yard being hosed down by the staff. When he goes into a&e, he reveals that it was his first night as a stripper, and he had told his wife he was working as a waiter. She comes in to see him, and finds out what his job really is.

Mike and Charlie talk to Mark. Mark tells them that Ken’s job is not needed in the department and that they will have to let him go. Mike and Charlie are left to break the news. Ken takes it badly and says he is leaving for good at the end of the shift. Duffy asks Mike for the bottle of champagne she had seen in his room for a last minute present for Ken. She wraps it, and goes in search of him. She is told he has already left, and when she goes outside, she sees him leave.

Jon gets out of his car and watches as a plane flies overhead.

Duffy runs out into the carpark, and sees Ken leave in his car.