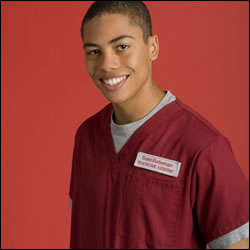 Sam is the eldest of Tess Bateman’s children and still lives at home with the rest of the family. He has a good relationship with both his parents but is spending more time out of the house in an effort to gain independence.

Having just finished college Sam has decided to take a year out before going to University. He is a bright lad and could do very well but is easily distracted by beer and babes. Sam is a likely young man who is easy to get on with. However at times Sam can be short and moody for no apparent reason. Lately his temper has been flaring up more often but he is very charismatic and people quickly forgive him.

In S20 E2, Sam comforts his mother, Tess, after her experience at the building collapse. In S20 E3, Tess is angry that Fleur is distracting Sam at work. Tess asks Sam to go to lunch with her but he sneaks off with Fleur instead. Sam wishes he could be more impulsive like Fleur, but she tells him he will be once his medication wears off. Fleur persuades him to sell his tablets to her friends as she needs the money, and then convinces him to call in sick and take the afternoon off work. In S20 E4, Tess asks Sam to stop seeing Fleur, but on Comfort’s advice she later invites Fleur to dinner. In S20 E5, Fleur makes Sam a picnic lunch, but they argue over Comfort’s friendship with Sam’s dad and Fleur flies into a rage. In S20 E6, it is Sam’s 19th birthday and Fleur has arranged a party at Tess’s house. However, Tess is shocked to get home and find disco lights and DJ decks. When she warns Fleur that they cannot have loud music because of the neighbours, Fleur flies off the handle. Later, she pours Tess a glass of wine and apologises. Tess drinks but becomes disorientated and dizzy, collapsing on the floor. She calls out for help to Fleur, who stands above her, holding a kitchen knife. Next episode in S20 E7, Abs is suspicious when he cannot get through to Tess. He speaks to a psychiatric nurse who warns him that Fleur is extremely devious. Sam returns home and Fleur tells him Tess is drunk and passed out so she has cancelled the party. When he hears Tess fall off the bed he worries and wants to call for help. Fleur confesses she has drugged Tess and lies saying that Tess wanted to section Sam. Abs, Nina and Sarah arrive and when they force their way in, Fleur barracades her, Sam and Tess in the bedroom and tries to persuade Sam to take an overdose with her. Abs manages to gain entry to the room as Fleur tries to kill Tess. After the event, Abs tries to persuade Sam to seek help and get back on his medication. In S20 E12, Sam befriends a boy with Aspergers Syndrome, whose mother has been electrocuted. In S20 E25, Sam is shadowing Luke and Nina in the ambulance. They attend a scene at a railway where two boys, Jason and Ryan. are injured. Sam hears a noise and walks down a verge to find a third boy, Carl, (who was earlier in the department with a broken wrist) now with a broken ankle. He calls Luke on his mobile but they have already left in the ambulance. Sam treats the boy, with Luke instructing him on the phone until they come back for him. It is a life changing experience for Sam, who decides he wants to become a paramedic. In S20 E26, Sam is frustrated to learn from Comfort that he can’t be a paramedic until he’s 21. Annoyed that he can’t follow his dream, and fed up with his reception job, Sam tells Charlie he’s leaving and gives him his resignation letter. Charlie manages to calm Sam down and tells him he can be an HCA instead. In S20 E27, Sam tells Tess that he is going to be an HCA, she is concerned that he is not ready to take on such responsibility but he says he’s adamant and tells her he’s not asking for her permission. In S20 E29, Six year old Douglas is brought in after having fallen from a roof at school. He has learning difficulties and his teacher wants him to be statemented to give him extra support at school however his angry father doesn’t want his son to be treated differently or classed as stupid. Sam looks after the young boy and gains his trust – he discovers the boy jumped from the roof, trying to fly. Sam is overwhelmed by the case, frustrated that he can’t help the boy further and Tess finds him nearly in tears. Tess is concerned that Sam is not able to cope with the emotional challenges his job will entail. In S20 E31, Sam helps welcome new receptionist Alice to the job. However she’s a shy wallflower and Sam is worried she may not be cut out for the job. However she proves herself capable and Sam sings her praises to Tess. In S20 E35, following her 4-week trial in the department, Alice feels sure she won’t be asked to stay on at Holby but Sam coaches Alice on how to impress Tess and she is thrilled to learn the job is hers. Following Nathan’s needle prick injury, he is determined to find a scapegoat for the incident. In S20 E44, Nathan manipulates a confused Sam into admitting he did not dispose of the needle correctly, Charlie is furious to find a tearful Sam packing up his locker and tells Nathan he is a bully. The staff all protect Sam and Nathan is forced to back down. In S20 E45, Sam tells Tess that he is going to live at Kelsey’s and that he doesn’t want to live with his dad when he comes home. Tess is shocked and hurt but later confides in Maggie that she’s not sure herself if she wants him back either. In S20 E46, Tess is devastated when Sam tells her he’s moved out and Mike says he wants a divorce.

In S21 E13, broke Kelsey tells porter Ben that she can set him up with Alice – but he’ll have to pay her £20 for the privilege. However, Sam intervenes when he finds out what’s going on, telling Alice that Ben is not good enough for her – but it seems he may have feelings for Alice himself. In S21 E16, following Josh’s stabbing, Charlie has a go at Alice for bringing a knife into the department. Sam does his best to comfort Alice. In S21 E18, Guppy is trapped in a burning building with a patient. Following his rescue, Guppy speaks to Alice and asks her to go for a drink. Sam overhears and is not pleased. Harry is suspended after Nathan convinces Alice to make a complaint against him fro harrassment, in S21 E22, Sam finds Alice crying in the staffroom. She tells him that everyone hates her because she is the one who made the complaint about Harry. Next episode Alice comes forward to withdrawn the complaint but tells Sam she plans to resign. In S21 E24, Sam is determined to persuade Alice to stay and when he hears she would like to go travelling in the South American Rainforests, he puts a plan into action. After a collection, Sam places a number of exotic plants around the reception so she has her own rainforest and has no need to leave. Alice is overwhelmed and decides to stay at Holby.