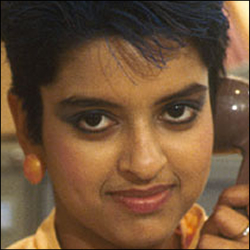 We are introduced to Susie in S1 E1, after she has recently had a new colour put in her hair. In S1 E2, Susie is suspicious of a woman who comes into Reception with a baby. It turns out she has snatched the baby from it’s mother. In S1 E5, Susie gets locked in a toilet cubicle. In S1 E6, the team have a subbeteo contest in the staff room. In the final, Ewart plays an inexperienced Susie – she wins (with a little cheating). Later, Susie attends a demonstration with other colleagues, outside a cinema which is showing ‘naughty nurse’ films. In S1 E9, Susie makes fun of a patient who has a boil on his bum. In S1 E11, Susie is shocked when her friend Duffy is brought in after being raped on her way to work. She stays at Susie’s house. In S1 E14, Duffy tells Susie she saw Baz coming out of a clinic, and rumours spread fast about her abortion. In S1 E15, the staff find out the night shift is to be closed. Susie and Duffy front a demonstration outside the hospital – while Ewart and his manager look out from their window.

In S2 E1, Susie has been unemployed for 8 months. The team meet again to discuss ways of getting the night shift re-opened. Their lobbying works and Holby A&E is back in business. In S2 E2, Susie has a flat warming party which all the staff attend, including new adminstrator Elizabeth Straker. In S2 E3, Susie is attracted to a new policeman, Frank Jameson. In S2 E4, Susie’s present to Ponting, as well as other goods are stolen from the department. Kuba discovers the thief to be an attention seeking old man. In S2 E5, a photographer, Leon, invites Susie to do some modelling at his flat. She hesitantly agrees, where he then tries to kiss her. In S2 E6, Susie’s modelling snaps are used without her consent, and Cyril copies them and sends them to the staff for a laugh – Susie is not happy with him, or Leon either, and rings him up in the night to threaten him. In S2 E8, Duffy is keeping quiet on her first romance since her rape ordeal – until Karen spills the beans infront of Susie that she saw them. Susie is annoyed Duffy didn’t tell her, but apologises later for being nosey. In S2 E12, Susie reluctantly goes to a punk concert with her friend, where a punk falls on some glass. She drives the punk, who has a deep cut on his hand, to A&E, and Kuba congratulates her. In S2 E13, Duffy confides her worry about her ex Peter to Susie, after she went round his house to no avail. Susie tries to phone him, but he hangs up, but later he turns up in the department. S2 E15 is Susie’s last appearance in the show – next series we learn she has left for a better job, and is replaced by tough Sadie Tomkins.