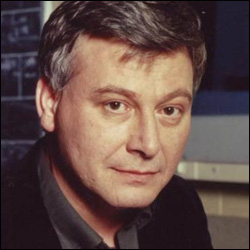 Charming Social Worker Tony Walker seemed just what newly bereaved Megan needed to lift her spirits. A romance between the pair beckoned but had its problems due to the fact he was a love-rat who was married.

We are first introduced to Tony in S5 E1, following an old man being brought in suffering from malnutrition and a fractured wrist. Tony offers him help, but the patient refuses to accept handouts and discharges himself. In S5 E2, Tony supports a wife, whose husband dies after a lorry crashes through his office. Megan first succumbs to Tony’s charms in S5 E3, who saves her after she is attacked by her neighbour. In S5 E5, a psychiatric patient, Wayne, rings Tony, threatening to commit suicide. Tony, although trying to find him, doesn’t show too much concern as he is a well known hoaxer. Wayne, who has already taken a number of pills, turns up in A&E and steals more pills by posing as a doctor. Charlie finds him collapsed in the toilets. A mother brings in her quiet boy, saying he is ill. A tip off from Tony, reveals she has a psychiatric problem. Tony also tries to tempt Megan with a trip to Paris – Ash tells her he’s married but she says she already knows and wasn’t going to go on the trip anyway. In S5 E6, a woman comes in believing her ‘baby’ is ill – and has no head. She is a regular, who Tony comes to visit – as her ‘baby’ is infact a dead fish. She had a miscarriage earlier in her life, which has caused her behaviour. In S5 E9, Tony tells Megan he has got a job in Manchester. In S5 E10, Paediatican Esther MaCauley abruptly calls a case of mistreatment on the parents of a small boy. Beth disagrees believing it’s brittle bones. Julian tells Esther has more experience, but behind her back, with Tony’s encouragement, she gets a second opinion and is proved right. Megan is planning a week in Snowdonia with Tony, but during the shift, his wife, Eileen, turns up and tells her they are still leading an active married life. Megan is shocked, and confronts Tony. He apologises and even insists they still go away together – Megan cannot believe his nerve. In S5 E13, Megan tears up a letter she was about to post to Tony and tells Duffy he really hurt her.