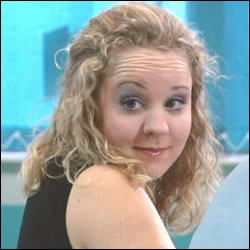 Gilly takes over from regular receptionist Jack Vincent near the end of Series 16. She is young, fun, and not afraid to speak her mind. She is also the daughter of well-liked porter Spencer, who is not very happy about her working there because she does not have the qualifications for the job.

Gilly does not take the job seriously, and delights in finding out other people’s business. She angers Nikki when she uses the hospital computer to access Jack’s file and find out personal details she then relays back to Nikki. Gilly seems to have no remorse when Nikki tells her using the computers to find records in that way is a sackable offence.

In S16 E27, Gilly reveals that it is her birthday – she delights in telling Max, who is also celebrating his birthday, that she is half his age. In this episode, Anna begins to suspect that Gilly is dealing drugs within the department after she sees her acting suspiciously with ‘friends’ who come in to visit her. This idea grows during the next few episodes when we see friends constantly coming in and exchanging money with Gilly.

In her last episode, Gilly is dramatically arrested in the department when a friend of hers is brought in after overdosing on drugs. Anna recognises the girl and says that Gilly knows her. Gilly tries to deny all knowledge of her but it soon comes out that she is lying. Anna calls the police but Gilly accuses her father of making the call, calling him useless. The police arrive and take her away.