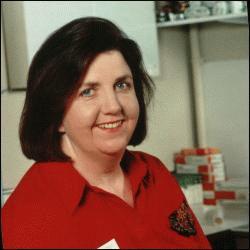 Warm and friendly Helen Green had a minor role as Casualty’s receptionist during Series 5. Her first appearance was in S5 E1, dealing with the many injured at a football match. In S5 E4, after visiting his wife on Clifton ward, Eric makes his way to the A&E department – after 48 years of marriage, it’s their first day apart and he doesn’t want to be alone. He tells Helen he has a swollen ankle. On examining him, Beth discovers he is ill with pulmonary edema, and later arrests. In S5 E7, Helen celebrates her birthday – Jimmy does a whip round and gets her a present – some lingerie. Her last appearance is in S5 E13, when the team have to be evacuated when Megan is held hostage in CRASH.