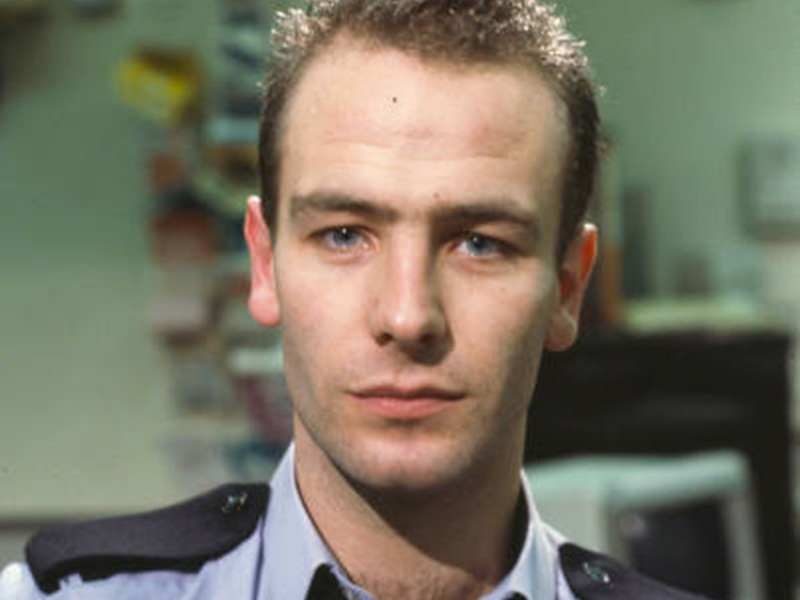 (to Julie) I was right over in Geri’s, I’m not flaming Mercury you know!

Good looking Geordie comic, Jimmy Powell, was Holby’s second porter. After a criminal record for theft, being at Holby for 3 years was Jimmy’s longest time for having held down a job. He enjoyed meeting people – chatting up women and numerous nurses – however he became restless in his job. He even toyed with the idea of training to become a nurse, but his lack of confidence and willpower, made him drop the idea.

Jimmy arrives in Holby at the beginning of Series 4. He first lands himself in trouble in S4 E4 – he finds a comedian, stabbed in the pub toilets – and the police suspect him, but he is later cleared. Jimmy asks Julie, the receptionist, out on a date – she accepts but regrets it when Jimmy gets really drunk – it takes a whole shift before she accepts his apology. At the end of Series 4, staff deal with an explosion in the city centre – Jimmy is waiting with the dead bodies, when from under the sheets a mobile phone rings – he tells the worried wife, he’ll get her husband to call back.

In S5 E3, Jimmy spends most his shift looking for a stolen briefcase belonging to an old man. When he does he is surprised to find it contains women’s clothes! Also in S5 E10, he is threatened by a crazed son, with a butcher’s knife, after his father has died. By S5 E11, Jimmy has a new girlfriend, who is a Student Nurse – she is brought in after a night of drink and drug taking. Jimmy is suspended after she lies to Julian that he stole drugs for her. In S15 E13, Megan is held hostage by a schizophrenic man in CRASH, he asks for the porter to take out a dead body in there, and Charlie Fairhead dresses up in Jimmy uniform, but the man panics and shoots Charlie in the chest.

In S6 E1, Jimmy is attracted to new Student Nurse, Kelly – he already starts to chat her up, but they become just good friends and play lots of pranks on eachother – in S6 E4 Kelly and Ash tie Jimmy into a straight jacket. But he is upset in S6 E10, to find Kelly has commit suicide. Jimmy also did moonlighting on a market stall – but his girlfriend’s child gets badly burnt when her tracksuit catches fire on a portable gas fire. He takes her to hospital, but the fact they didn’t take her clothes off, makes her injuries worse. Jimmy feels guilty. In S6 E15, Jimmy reveals he is going to leave. He’s been offered a job driving his friend’s van – but he can’t drive – he asks the paramedics and other staff for driving lessons, but they all say no. His last shift is a busy one – a major aeroplane crash.