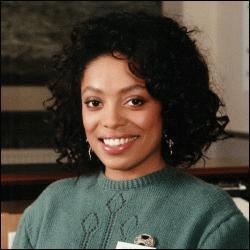 (to Jimmy) Aah about time!

Bright and efficient Julie Stevens joins the department from S4 E1 as receptionist. Julie left a job in the office for her role in A&E as she wanted a job with more responsibility and that would give her more job satisfaction. As well as being good at her job, she also has a good sense of humour and fun.

Porter Jimmy takes a fancy to Julie, and in S4 E4 she accepts going on a date with him. They plan for him to come round with her parents for supper before heading off to a club, where her brother also works as a bouncer. This episode she also deals with a complaint from a man claiming to have seen a cockroach. In S4 E5, Julie jokes with Jimmy about his poor dancing skills. And in S4 E6, she teases Cyril for joining a dating agency. In S4 E8, Jimmy spends the shift apologising to Julie, after they went out and he got drunk, frightening her. She eventually forgives him. Julie is also upset about her low wage – Valerie offers her promotion and she says she will think about it. Next episode in S4 E9, she is promoted to supervisor. This episode she is also attracted to new agency nurse Glen. In S4 E10, a man, with severe eye pain, is brought in claiming to have been mugged. But when Julie lets information slip to a policeman, they find out he matches description of a man who raped a women – who then sprayed gas in his eyes. In her last episode in S4 E12, Julie has to help deal with the aftermath of an explosion in the city centre. She is also concerned for her mother, who she was planning to meet in town later that afternoon. But her fears are unfounded when she rings her and finds she has been watching James Bond at home.