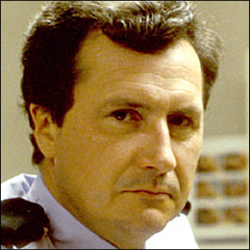 (holding a bunch of flowers) Mr Plimmer, I’ll only be a flash!

Kuba Trzcinski was Holby’s porter for the first three years of the show. He was Polish and spoke strangled formal English with a strong accent. His haven was the porter’s lodge where he hoarded ‘borrowed’ equipment from other wards, patient’s flowers and the paraphernalia needed to make the special Polish tea which he sometimes offered his none-too-grateful colleagues. He liked to watch videos if the Royal Family, to dance, sing and rehearse little speeches to the various ladies he admired and sometimes shyly approached.

Chivalrous and old-fashioned, Kuba often seemed a purely comic character. But he was highly intelligent and sensitive, and was the hero of the hour in the opening episode S1 E1. After toxic drums fall on workers at the Holby docks, Kuba helps to identify the toxic substance, by it’s smell of garlic, therefore helping to save the workers whose lives were threatened. At the end of shift, his colleagues thank him with a bunch of flowers. In S1 E2, a DHSS is secretly touring the A&E department, and Kuba accidentally lets slip bad stories about the hospital to him. In S1 E4, Kuba teaches alcoholic Clive a lesson by filling his whisky bottle with cold tea. In S1 E6, Kuba attends a demonstration with other colleagues outside a cinema which is showing ‘naughty nurse’ films. In S1 E8, after a recent attack on a nurse in the x-ray department, Kuba puts up a new alarm system. In S1 E9, Duffy argues with Kuba about the untidiness of the store room – Megan tells her to give him a break, as he works hard. During the shift, a terminally ill man, Harry, is brought in from a home with his four friends. As Kuba is wheeling to another ward, he stops to deal with a Polish woman who has slipped over in the corridor. As he returns to Harry – he has gone – Kuba worries because of the ‘full moon’. But his friends have taken him, so as to dress him up to meet a lady friend. In S1 E10, Kuba helps to get a bored Megan from an upstairs ward, where she is awaiting an operation. Kuba is also trying to steal raffle tickets to buy a new ventilator – Clive tells him off for not getting Ewart’s permission first. And a young boy almost persuades him and Duffy to tend to his sick dog. In S1 E11, Kuba is upset when a planned tour of the A&E department by the Royals is cancelled, after he has been practicing his welcome all shift. In S1 E12, Ewart tells Kuba off for stealing light bulbs and a scrabble board. He later visits Megan, where she is convalescing in an upstairs ward, and bores her by telling her gory details of a patient’s death, so much so, that she is forced to pretend to be asleep, so he’ll leave. In S1 E13, Kuba tells Charlie about his non-existent love life. In S1 E14, rumours are going round of Baz’s abortion – when Kuba finds out, he puts his foot in it by going to see Baz with a bunch of flowers and tells her he is sorry she lost her baby – Charlie is shocked, as he didn’t know. In S1 E15, as Kuba is passing a warehouse, on his bike, he witnesses a man, Bob, attacking another man, Lyndsey, with a baseball bat, after learning he has had an affair with his wife. He breaks up the fight, and Lyndsey is taken to hospital. Bob comes to the hospital, asking for Kuba, he cuts Kuba’s hand and threatens him so as he doesn’t tell the police. Ewart invites Kuba to spend New Year with him, for his own safety.

In S2 E2, Kuba attends Susie’s flat warming party and attempts to get Ewart drunk. In S2 E3, Kuba is caught borrowing blankets from the department, to care for his elderly landlord. Ewart tells him off, which Kuba finds offensive and says he will resign. When he goes to Ewart’s office to leave his resignation note, he finds a parcel from Ewart, with a set of blankets and a note saying he can make an exception. Kuba screws up his letter. In S2 E4, a Polish man electrocutes himself after trying to get through to Poland on his radio, he is taken to hospital with his worried wife. They get on well with Polish porter, Kuba, and they even invite him over to dinner. In S2 E6, a man comes in with a head injury, which Duffy deals with. He is unhappy with the service. First Kuba accidentally bumps into him and then finds his wallet is missing and accuses Kuba, as he is foreign. The police are called and take statements. Kuba is upset, till he later comes in and says his wallet was found in a taxi – but he doesn’t apologise properly. In S2 E8, a young girl, is brought in by her Mum, with a fractured arm. She is crying loudly and Kuba is brought in with his magic tricks to calm her down. In S2 E13, Kuba is suffering from a cold, he refuses to take pills, but cures himself with natural remedies.

At the beginning of Series 3, we see Kuba trying to improve his English. In S3 E4, Kuba asks Sadie out on a second date, with her and her children, but she backs off thinking he’s getting too personal. In S3 E9, Valerie tells Charlie the department has got to make economies – Kuba faces the sack. In S3 E10, Kuba is moody and snaps a Sadie, as he fears for his job – his fears are confirmed as his last appearance is in this episode. 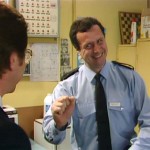 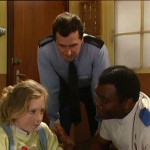 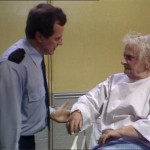 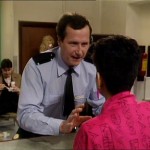 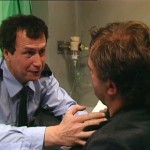 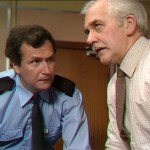 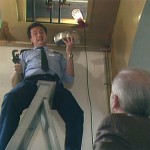 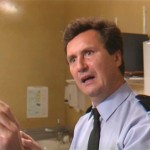 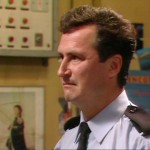 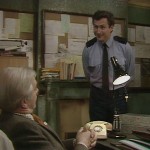 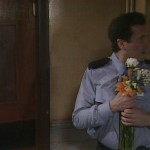 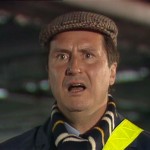 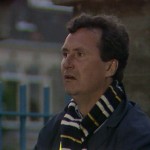 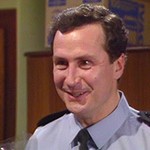 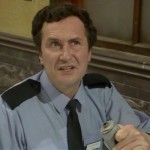