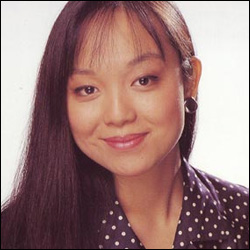 [To Charlie] I’ve never dealt with real life patients before. Must be quite exciting.

Pretty japanese receptionist Mie moved from the admin department to A&E in Series 8. She was a clerk-typist, and was familiar with the workings of A&E. However, she revealed to Charlie early on that although she could work the computers, she had little experience dealing with people. Despite being only 22, Mie shows she knows her own mind. When her Japanese parents returned home after living in the USA and London, she refused to join them, worried about the hostility of some Japanese towards those who return with Western attitudes. So she stayed with an uncle who ran a car factory in Holby.

In S8 E4, Mie has to deal with an elderly man who reacts badly to her seeing she is foreign. He later reveals he was a prisoner of war.

In S8 E20, Mie tells Ash that she’s not sure whether she can take up his previously made offer on a room in his flat. She says her uncle is thinking she is becoming too westernised and her parents want her to move back home.

Mie and Ash date for a while, but the romance turns out to be shortlived when Mie decides to go back to Japan.