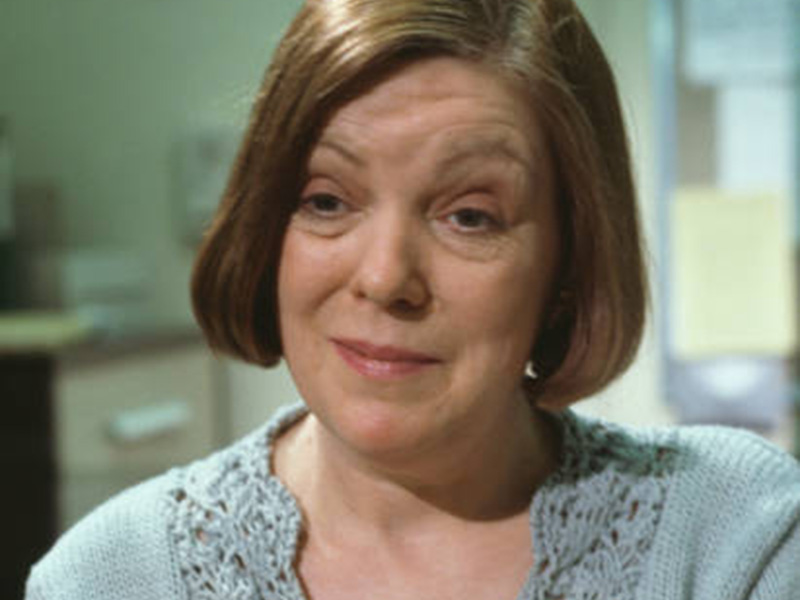 Would you mind not barging in please?

When she first made a stately appearance behind the desk in the A&E reception in Series 6, Norma Sullivan showed she had standards. Married to Chris, and with a grown up son, she hid the fact that she also cared for her mother, with Alzheimer’s disease. She seemed stiff and stuffy, as though she deserved a grander job than that of a receptionist. Staff and patient alike caught her sharp tongue. Norma also liked a gossip, and was often found to be overhearing conversations not meant for her ears.

In S6 E6, Norma reveals her hobby in amateur dramatics by publicising her new play production. However, two of the cast arrive at reception, when the leading star, Marcus, has twisted his ankle. He is happy to still be able to perform, whereas his understudy, Ronald, is praying otherwise. In S6 E7, a confused old woman is brought in, Norma discovers throughout the shift she has stolen items including a mobile phone. In S6 E9, an old drunk upsets Norma when he arrives after falling down the stairs of his local pub.

In S7 E1, Norma is forced to look after a young boy in reception, when his mother arrives to see her partner who has been involved in a car accident. In S7 E3, Norma reveals to be worried about her elderly mother, with Alzheimer’s disease. During the shift, a body builder arrives in A&E with a sore throat, Norma dismisses him as not being serious. He goes outside where Maxine finds him collapsed. He is rushed into CRASH, where he dies – his friend makes a complaint against staff. In S7 E5, Norma befriends a young girl, Sophie, after she accidentally cuts her mother, who has ME, in the forehead with a knife in anger. Later, Norma’s mother is brought in with a policeman, after she is found wandering the streets with a burnt hand. Norma is upset when she doesn’t recognise her. In S7 E6, Norma is still upset over her mother, she discusses it over with Charlie, who tells her she’s doing the best she can. Next episode in S7 E7, Norma is late for work after struggling to cope with her mother. In S7 E9, Charlie tells Jenny and Norma off for getting pizzas delivered to reception, but upsets Norma when he realises she wasn’t involved. Jewish Sam is brought in after collapsing from angina. He is given the all clear, but as him and his wife, Leah, wait to go home in reception, Leah collapses and suffers an aortic aneurysm. Leah dies and Sam is distraught – Norma tries to comfort him with the fact that atleast she died quickly, and not dragged on, referring to her mother. In S7 E11, Norma reveals her mother has been put into a home. In S7 E12, a disabled man falls from his wheelchair and cuts his hand. His wife, Olive, takes him to casualty and tries to abandon him there. Norma sympathises with Olive. In S7 E20, Norma has trouble with some foreigners who are looking for the Magistrates Court, she then receives a call to say her mother has died and leaves work early. In S7 E21, Norma is in mourning, after her mother’s funeral – Mike offers her his support. In S7 E24, Norma helps to get patients out the building after the hospital is on fire.

In S8 E2, Norma is behaving strangely and is sent home. Mie Nishi-Kawa takes her place. In S8 E4, Norma is back at work, but obviously unhappy, and she eventually clashes with manager Mark. In S8 E5, Norma is given a date for her disciplinary hearing, but after another clash with Mark, she resigns. In S8 E6, Norma is brought in after a fall and finally admits to having a difficult menopause, staff are upset they didn’t recognise the symptoms. 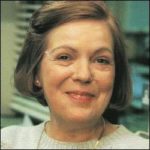 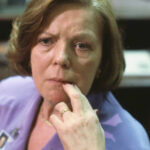