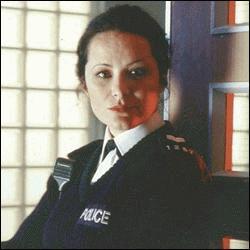 Mr Gallagher, Hi I’m Sergeant Rachel James, I need to speak to some people about this incident.

Sergeant Rachel James is obsessed with Med Reg Patrick and begins a steamy affair with him. She considers ending her marriage for him, but Patrick’s intentions are less than honorable and when SHO Lara turns up, his eyes are already wandering.

We are introduced to her in S16 E1, when she is involved in the case involving Josh and the RTA which caused a teenager’s death. Nikki, believes Josh was driving too fast, and tells her concerns to her boss, Jeff Maguire, who in turns tells Rachel – Nikki is forced to admit the truth, even though Finn and other staff members told her to stick up for Josh. In S16 E2, Rachel again interviews Josh, Fin and Nikki, where Fin admits to Josh’s speed. In S16 E3, a motorcyclist shoots a shopkeeper, before being involved in a collision with a car. He faces charges, and Rachel tells the disbelieving mother, that he will be questioned. Patrick asks Lara for an after shift drink, but later cancels, when Rachel says she’s had a bad day and wants to spend time with him. However in S16 E7, Patrick turns down Rachel on the phone, so he can go to a Halloween party with Lara. However, Dillon overhears the phone call and warns Lara – who stands him up. In S16 E15, Patrick spends his last night with Rachel, before her husband, Greg, returns. Rachel tells him she wants to tell Greg about their affair, which worries Patrick. They argue and she storms off, thinking he doesn’t love her. At work he tries to call her. Meanwhile, Rachel, gets out of her car to deal with a woman who had just been mugged – she runs after the youths but is attacked herself. She is brought in, shocking the team and is also found to be pregnant – Patrick pushes Philippa out the way to treat her himself, but all efforts fail and she dies. When Greg turns up – Patrick tells him the news, and Greg is shocked to discover the baby could not be his as he had been overseas for five months. Lara tries to comfort Patrick and later in Resus, Patrick tearfully says his goodbyes to Rachel – Greg watches behind him realising something had been going on between them. Next episode, Greg on discovering Patrick’s affair with Rachel, fights with him in CRASH. And later attacks Patrick at a cottage, he is staying in with Lara, and tries to drown him in a nearby lake.