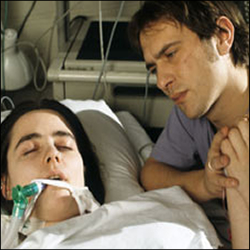 Jude is lying on the floor and there is blood all over the place. Charlie is with her and soon Baz and Sam come running with a trolley. As gently as possible they move Jude onto the trolley and rush her into resus. She is getting weaker and soon Jack Hathaway and Baz realise that she must have a tamponate and that the knife must have gone into her heart. They try to remove some of the blood and are about to take her to theatre, when she once again gets worse and Jack realises that they have to operate there or she will not make it, especially since the surgeon has not even arrived yet. Jack opens Jude’s chest and they try to give her heart some massage, since she has arrested. Finally she makes a turn for the better and they can take her into theatre. There are, however, some complications and they have to take her on by-pass a few times, until she is stabilized.

While they are trying to save Jude in resus, Matt phones reception and asks for Jude. Charlie talks to him and explains the situation and Matt decides to fly to Holby from Crete, even though everyone thinks he is insane for doing so. He is lucky and finds a flight and then takes a taxi from the airport. When he arrives at the hospital Jack takes him straight to see Jude, who just has come out of theatre. She is lying there, still asleep, and Matt is talking to her, explaining how important she is to him.

The Police wants to find Ken Summer, as they think he might have something to do with the stabbing. They find him, running on the roof of the hospital with a pink teddy bear in his arms, trying to find “the perfect blue”. He seems think that he is a bird and when the policemen run after him he jumps down the roof, thinking that he can fly. He falls straight through a roof of glass, but miraculously he does not break any bones.

Alice Cornwall is found outside A&E, suffering from an asthma attack and with a cut in her hand. They think that she must have seen what happened to Jude and that she, because of that, is in a state of shock. Everyone tries to get information out of her, but she is psychotic and does not think straight. When Sam and Kate talk to her in the cubicle she says something about Jude having said that she should talk to the Police about her step-father who had died and that she had had to get away. They realise that Alice has got something with the stabbing to do and when Kate goes to talk to the police officers, Alice empties her bag on the bed and Sam can see a knife, covered in blood.

William Turnbull is an old man who is brought in. He has got trombolysis, he is very cold and he seems to have a cloth below the knee. He also seems to be in his own world, not answering to anything they ask, so everyone assumes that he no longer understands anything of this world and they make comments on him straight in front of his nose. Gloria, however, is trying to make them realise that he is a human being and when she talks to him on her own and after also having put his hearing aid back on, he starts talking again. He says that there is no use saving him anymore, but after his neighbour, Erica Chisnall, has arrived and promised to take care of his dog Hector while he is in hospital, he is much more positive.

Josh is having a rough time, but he does not admit that he needs councelling. He is not at all sympathetic towards William Turnbull, more or less saying that he is a lost case and when they have a call and the patient turns out to be a woman with toothache, he almost loses it, telling her that someone might have died while they were there, trying to help her toothache. Eventually Josh blames Liz for what happened to his family, saying that it was her fault that they got stuck in traffic while his family was burning to death. They end up crying together in front of the ambulance.

* Ken Summers, cronic manic-depressed man who jumps from the roof of the hospital, but does not break a single bone.

* William Turnbull, an old man who lives on his own with a dog, has a cloth below the knee.

* Alice Cornwall, woman who Jude took to the mortuary to identify step-father, now found outside the hospital suffering from an asthma attack.

* Pat, a woman who has called the paramedics because she has got toothache and Josh tells her a few selected words.

[Sam is running down the corridor.]

[Matt is sitting next to the bed where Jude is lying, still unconscious.]

Matt: You’d laugh. It cost me a fortune to get here. I’d just written to you as well. You’d better come and visit me, you know. Sometimes I thought… Thought you were there. Wishful thinking. It’d be a good place…to get better. Come on Jude, I love you. You can’t die. Please…