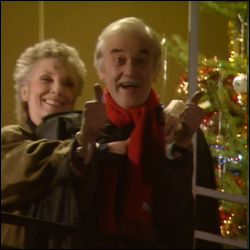 Kuba is putting up the Christmas decorations. Cyril is getting hassled by a woman called Jemima, who he met at a party, he’s avoiding her. Megan faces an internal investigation and a coroner’s inquest, after Joyce’s daughter, Lucinda, accuses the hospital of negligence. Megan is cleared of all charges, and a result of ‘accidental injury’ is brought.

Joyce’s neighbour, Mrs King faces her first Christmas alone, after her husband died of cancer. It was to be their 30th anniversary. She takes an overdose of paracetomol and vodka – Lucinda finds her and calls 999. In a ward, Lucinda invites Mrs King to London to spend Christmas with her.

Nurse Francine O’Dwyer takes her other nurse friends, Jane and Theresa out, to celebrate Jan’s birthday. They have fun after ordering a tarzan-o-gram. As they leave, a hit and run driver knocks over Francine and Jane. Jane is give the all clear after x-rays, but Francine suffers eye damage, she faces the possibility of blindness and is scared.

Elizabeth visits Ewart, who is recovering after his heart attack. Outside the court, Charlie catches some boys, pretending to be collecting for charity. He lets them off, on condition they go with the team outside the hospital and sing carols to Ewart. Ewart is happy to see them. Mary reveals her wish to move on to surgery.

Lucinda : I believe you have my mother, Mrs Arthur here, Mrs Joyce Arthur.

Charlie : Are you Mrs Arthur’s daughter? I was wondering if I could have a word with you? Just this way…

The staff and children sing ‘Silent Night’ outside Ewart’s window, at the end of the credits you hear ‘Happy Christmas’ being shouted.

* Jane and the other nurses celebrate at The Montpelier pub.

* Oscar (extra) appears as an extra in the pub.

* The tarzan stripper is called Jason, and is a drama student.