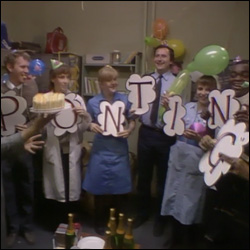 A group of cavers, Maggie, Guy, Bill and their leader, Jonno, go potholing in underground caves. Maggie suffers an epileptic fit while climbing a rope. She struggles and causes a rock to fall on Jonno. Bill calls for rescue, they take Jonno our first, who suffers a broken femur. Charlie is called out to rescue Maggie, and her boyfriend, Guy, who is very uptight. Charlie falls down a crevice, but is saved from any major injury. Outside Ponting waits for them, with a fellow caver, who tells him anecdotes of people who have died – he gets annoyed and shouts at him.

Richard Huggins come in with a head injury, which Duffy deals with. He is unhappy with the service. First Kuba accidentally bumps into him and then finds his wallet is missing and accuses Kuba, as he is foreign. The police are called and take statements. Kuba is upset, till later Richard comes in and says his wallet was found in a taxi – he doesn’t apologise properly.

A drunk man with a broken arm causes a disturbance, especially in the x-ray room, where the alarm is set off.

An Asian woman is brought in by her neighbour, Mr Khan, after suffering a miscarriage, which Mary believes was self induced. Six of her family come in, and Mary tells them the news.

Mary is unhappy about Duffy’s work as Acting Sister, and Duffy feels uneasy, they talk about it, finally, after lots of sniping during the shift, and Mary tells Charlie, that she was ‘brilliant’. Ewart argues with Elizabeth about hospital security, later on she plucks up the courage to ask him out for dinner, he accepts. Susie’s modelling snaps are used without her consent, and Cyril copies them and sends them to the staff for a laugh – Susie is not happy with him, or Leon (the photographer) either, and rings him up in the night to threaten him.

It’s Ponting’s final shift, as he goes to the Staff Room, he finds the staff have a surprise party for him. They sing, shower him with streamers and give him a tankard as a present.

* Maggie – has fit while climbing a rope ladder.

* Jonno – Maggie knocks on a rock which falls and hits him, suffers a broken femur.

* Asian woman – miscarriage, believed to be self induced.

* Mr Taylor – drunk with a broken arm, causes a disturbance.

* Woman – DOA after being run over.

Guy : Maggie! I was listening to that!

Maggie : You haven’t got a garden, Guy.

Guy : Well, I dunno, I’m planning on one (they hum songs)

Staff hold a farewell for Ponting, and cover him with streamers;

Andy : If it’s as cheap as this, what happened to the rest of the whip round! (laughs) Presents for long holiday, I’ll be in trouble, thank you very much.. no tears no tears, we’ll run out of kleenex, you’re crazy!

* Andy has been a paramedic 15 years.

* Elizabeth does yoga classes on Thursdays.