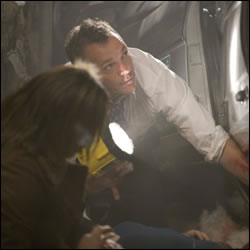 Ric and Harry interview for a locum Consultant General Surgeon when a familiar face turns up – Nick Jordan. Ric questions Nick on how he left Holby previously under a cloud. Nick is fiercely defensive and the interview comes to an abrupt end when he storms out.

It’s the Holby City Trust’s Christmas Party, Kelsey persuades Nick to take her spare ticket, whilst she, Donna and Woody manage to blag a lift with him.Elsewhere, Charlie and his girlfriend Helen are also in attendance at the party. However, he gets a call from the babysitter, Woody’s mum Caroline, saying that Louis has gone missing, and heads back home.

A taxi driver, Bernie Doyle, drives his car into a rival taxi firm’s office. He injures his wrist whilst Mitch Campbell, boss of the other company suffers an angina attack at the scene. The feuding families are unhappy that Bernie’s daughter, Tara, and Mitch’s son, Lee, are dating. Forceful Sean drives her sister Tara home by locking her in the taxi whilst Lee gives chase.

The car chase causes a pile up in a tunnel; Charlie, Nick, Woody, Donna, and Kelsey end up trapped. Selena, who was also driving to the party, is the first on the scene and single-handedly copes until the emergency services arrive.

Helen has a collar bone fracture and is unable to move from the car. Charlie gets a terrified Kelsey to go and sit with her. Meanwhile, Nick tends to Tara, who is seriously injured. He argues with Charlie over whether they should amputate her leg.

Woody and Donna find a man, David, trapped in a car with his baby son. Rescue attempts are dashed however when they inadvertently cause the tunnel to collapse on them all further.

The story continues in Part Two.

Injuries from the tunnel collapse;

* HOLBY CITY characters that appeared in this episode are Ric, Nick, Connie, Donna, Mickie and Lola.

* Nick reveals he had spent time working in Chicago, however Ric questions him on why he hasn’t worked for two months. ‘I’m fussy,’ Nick replies.

* Ric isn’t happy with Nick, telling Harry he doesn’t trust him and calls him a ‘Cardio-cast off with attitude’.

* Woody is keen to pull Kelsey after last week and thinks he’s in with a chance, telling Luke ’20 quid says she’ll go out with me’.

* Donna is gutted when she discovers her and Kelsey are wearing exactly the same dress. ‘How am I supposed to pull when we look like The Cheeky Girls?’

* Charlie has been dating Helen for four months but has yet to introduce her to Louis.

* Kelsey reveals to Helen she’s afraid of the dark – her mother used to lock her in the cupboard under the stairs.